The Pandemic Recession and Government Stimulus

Never before has the global economy been deliberately put into an induced coma. Owing to the coronavirus pandemic, businesses are struggling to break even and unemployment is soaring high. The sudden shock called for a speedy and massive policy response. To support vulnerable businesses and increase economic output, governments have been forced to embark on an expansionary fiscal policy. This policy involves tax reductions and an increase in government spending as a tool to influence the level of aggregate demand and national output as well as to promote macroeconomic objectives such as full employment, economic growth, and price level stability (low inflation). But is rising public debt a cause for concern? New economic thinking suggests perhaps not, at least for now.

Economic impact of the pandemic

The impact of the pandemic was mostly felt in the second quarter Q2 of 2020 as the majority of affected countries fell into recession with double digit negative GDP growth. The big and supposedly resilient economies such as the EU, UK, and US were unable to withstand the pandemic shock on their output. Perhaps they were even more vulnerable as a result of their economic complexity and the role of easily disrupted services in their economies. By the second half of the year 2020, the UK recorded a negative growth of 11.78%, the EU (-8.25%), the Eurozone (-8.95%), the US (-4.35%), and Japan (-4.25%) compared to the same period of 2019.

The easing of the restrictions on movement in Q3 had both merits and faults. An improvement in the economic output and a corresponding second wave of COVID-19 outbreak, much higher than the initial first wave, resulted in further downside to economic activity in Q4. While the impact of the pandemic on employment was mitigated by government support schemes, the changes in hours worked were much more pronounced. Compared to Q2, the hours worked in Q3 increased by 14.8% in the Eurozone and by 11.9% in the EU. Meanwhile, declines were recorded compared with the same quarter of the previous year, at 4.5% in the euro area and 3.7% in the EU respectively. The increase in government spending resulted in an increase in output in Q3. However, this is likely to result in higher inflation rate if it is not properly handled. The improvement in economic activities in Q3 was nevertheless not sufficient to pave the way for lifting the countries out of the recession – figure 1 shows the 9 month GDP growth rate across the globe. Peter Hooper, Global Head of Economic Research for Deutsche Bank, wrote in a note to clients that world GDP will return to the level it was before COVID-19 by mid-2021 after a stronger-than-expected economic bounce in recent months. His statement follows Deutsche’s upward review of its global GDP forecast to -3.9% after predicting a year-on-year contraction of -5.9% in May for 2020. This optimism might be as a result of the surge growth in the US and Eurozone in Q3 2020, even though activity is set to moderate for the rest of the year, and possibly contract in Europe. The US total Q3 output improvement exceeded Europe’s GDP gains in its biggest economies, which are now implementing tighter restrictions after another surge in coronavirus cases and the fear of new strains.

The response to the pandemic has caused a significant increase in government borrowing and debt. While outlining the UK’s government spending plans for 2021 to the Members of Parliament, Rishi Sunak, Britain’s Chancellor of the Exchequer (Finance Minister) cited Office of Budget Responsibility forecasts with expectations that the economy will start recovering by 5.5% in 2021, 6.6% in 2022, then 2.3%, 1.7% and 1.8% in the following years. The action taken in response to the pandemic means there has been a significant but necessary increase in the UK’s borrowing and debt. This is a total of £394 billion ($532 billion) in 2020, or an equivalent of 19% of the forecasted annual GDP. The borrowing will fall to £164 billion ($221.5 billion) in 2021, £105 billion ($142 billion) in 2022-23, then remains at around £100 billion ($35 billion), 4% of GDP, for the remainder of the forecast.

The pandemic has forced the EU to suspend its fiscal rules — requiring governments to keep deficits below 3% of GDP and overall debt under 60% of GDP – piling pressure on governments to deleverage. Hence, the Eurozone budget deficits rose almost tenfold to counter the pandemic. For the first time, the Eurozone’s sovereign debt was larger than the bloc’s economy in 2020 due to government responses to the pandemic, which racked up €1.5trillon ($1.83 trillion) of extra debt. In November 2020, the public debt of the United States was around $27.45 trillion, over 4.44 trillion more than a year earlier, when it was around $23.08 trillion.

At the end of Q2 2020, the government debt as a percentage of GDP has grown YoY in most countries. Among the reviewed countries, only the Republic of Ireland registered YoY decrease (-0.3 percentage points – pp) in Government debt to GDP ratio. The Republic of Ireland is also the only country in Europe and America with a positive GDP growth at 9M 2020 (see figure 1 above). All the EU member states including the United Kingdom recorded YoY increases in government debt to GDP ratio with France taking the lead (+14.9 pp) followed by Belgium (+12.9 pp). 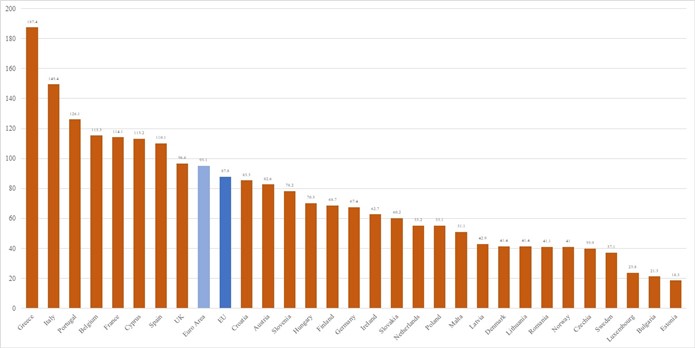 Debt to GDP ratio is also seeing an upward trend in the Americas, with Argentina recording a 7 pp increase, while Brazil and Mexico registered 8 pp to reach 91.7%, 85.56% and 54.2% respectively. In Sub-Saharan Africa, the Republic of South Africa, Kenya and Nigeria’s debt to GDP ratios also increased by 11pp, 4pp and 2pp to 69.39%, 66% and 18.2% respectively.

The Modern Monetary Theory advocates such as Stephanie Kelton, and, on the political side, Alexandria Ocasio-Cortez in the US, argue that governments can spend as necessary on all desirable causes – reducing unemployment, green energy, better healthcare and education – without worrying about paying for it with higher taxes or increased borrowing. Their thinking is not too far from the new-Keynesian orthodoxy which advises that unemployment can be cured by stimulating the economy – either through monetary policy, which focuses on cutting interest rates or through the fiscal policies of lower taxes and higher spending. Given that tax cuts do not have the same multiplier effect on economic output as government spending, most governments have chosen the latter, while others utilized quantitative easing “QE” (to keep borrowing cost down), or even both tools. The Bank of England, under its latest QE programme, has been buying up UK government bonds almost as fast as the government is issuing it. As of November 2020, the stock of assets held in the Asset Purchase Facility totals £895 billion ($1.22 trillion). This is an increase of 38.76% from the March 2020 record.

Figure 5. Bank of England Purchases of Bonds (in £ billion) 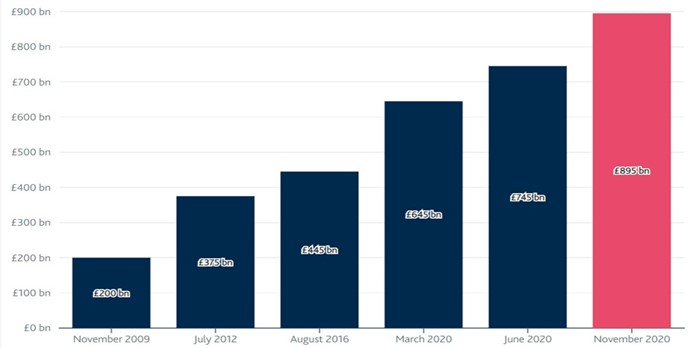 At the press conference held on December 10th, Christine Lagarde, President of the ECB, presented the ECB’s decision to increase the envelope of the pandemic emergency purchase programme (PEPP) by €500 billion to a total of €1.85 trillion ($2.27 trillion). The monetary policy measure aims to preserve favourable financing conditions over the pandemic period, thereby supporting the flow of credit to all sectors of the economy. To stimulate the US economy in the wake of the damage caused by the COVID-19 pandemic, the Federal Reserve embarked on the purchase of government bonds and mortgage-backed securities reaching $7.4 trillion on December 21st, 2020. This is a 78.4% increase from the $4.15 trillion in January 2020. The Central Bank of Canada’s QE programme was one of the most aggressive anywhere in 2020. The programme has been used to buy nearly $200 billion of federal government bonds since April. And the bank has committed to buying at least $4 billion a week in government bonds to keep the borrowing rates low. This has caused worries especially from the Conservative Party lawmakers that the Bank of Canada will start distorting the bond market at the current pace of purchase and they appear keen to put it in check. In November 2020, Sweden’s Central Bank surprised markets with a bigger-than-expected expansion of its asset purchase programme, to 700 billion kronor ($82 billion). The People's Bank of China used quantitative tools, such as lowering the amount of money banks have to keep in reserve, and provided 1.8 trillion yuan ($0.28 trillion) of “re-lending” funds for banks to pass onto small and medium-sized businesses. The lending rate was cut by 275 basis points by the South African Reserve Bank in response to the COVID-19 crisis and it will continue buying government bonds in the secondary market if more dysfunctionality arises. Meanwhile, a similar upsurge of public debt is under way in the rest of the world.

Even though this expansionary fiscal policy and the central banks’ role of buying government debt to keep rates low and support growth are clearly unsustainable over the medium term, the costs of inaction would have been far higher. Bloated debt levels and a shift in policy could heighten the risk of a financial crisis. But no one knows if or when interest rates are going to rise, and, should that happen, it will be the taxpayers that will be forced to shoulder the burden of this vast public debt. In order to control inflation that is associated with the supply of money, governments will need to have proper plans in place on how and when to revert to spending less or withdrawing money from the economy through taxes and by raising interest rates.

In the meantime, the developed and emerging countries’ consumption-driven economy will benefit Asian exporters. With the rapid development of IT services sector in India, the country will mostly benefit from the pandemic global lockdown, resulting from more work inflow from the digitisation of the global economy. China’s export driven economy is well positioned and already benefiting from global high demand for medical and electronic equipment.

So, while the world awaits the rollout of COVID-19 vaccine in 2021, the most pertinent risk to global economy will remain another wave of the virus.