“It’s over! Over! Over! Germany are the World Champions!”, Radio reporter Herbert Zimmermann’s jubilant words still resound in the hearts of many Germans, as a newly-created West Germany conquered the most coveted trophy in international football, having beaten the famous “Golden Team” of Hungary in the 1954 World Cup Final. Thus, one of the greatest surprises in the history of the sport opened up new horizons for post-war Germany. What is often overlooked, though, is how Adolf Dassler’s entrepreneurial spirit paved the way for this remarkable performance, for his famous sports shoes helped the German players attain a decisive advantage over their rivals, since the football field from Bern was soaking wet at the hour of the match because of the heavy rain that had fallen that day.

In 1920s Germany, the country was struggling to recover from the deep wounds it had suffered during the previous Great War. Raw materials were lacking from stores, given that most of them had been used for war production and the country was paying war damages. The penury of resources which could be allocated to the garment and footwear industry was ever more stringent and there was little prospect that things would improve any time soon.

A 20 year-old shoemaker named Adolf “Adi” Dassler used to spend his time scavenging scrap throughout the military remains in his native town of Herzogenaurach. His inclination for manufacturing shoes out of scratch was taken to the next level when he first took up the mission of producing the first specially-designed sports shoes in his mother’s laundry. He soon realized that pig bladders were useful not only for making footballs, but also for bringing his innovative ideas to fruition. Three years later, in 1923, he manufactured the first football shoes with studs, which boost a player’s equilibrium and ability to run during a match played on tough weather conditions. That same year, he was joined by his brother Rudolf, who would later split from Adi’s factory and make his own brand of sports shoes.

Gebrüder Dassler Sportschufabrik (The Dassler Brother’s Sports Footwear Company), listed in 1924, was Adi and Rudolf’s first business, originating in their family’s laundry where Adi’s ideas began to take shape. When the company grew further and further, the brothers were able to relocate its headquarters to a larger building in town. Their shoes were well-known in the neighborhood of Herzogenaurach, as they had carried out a successful campaign to promote their products by sending samples to the local sport clubs. The 1928 Summer Olympics in Amsterdam provided the best opportunity for Adi to demonstrate the usefulness of his shoes. He gave track and field athlete Linda Radke a pair and she won her running competition for the shoe manufacturer, thus demonstrating to everyone the effectiveness of the sports shoes he and his brother had made. Then, in the 1932 Olympics several professional athletes used his light and versatile shoes and further made his brand famous. At any rate, the peak point was at the 1936 Summer Olympics which were hosted in Berlin. Jesse Owens, the celebrated sportsman, “secured” a record of four gold medals using Adi’s invention.

After going separate ways with Rudolf, Adi set up the Adidas company in 1949. Due to the success of his company, he established solid relations with various sportsmen, including Germany national team coach Sepp Herberger. He accompanied the German squad for several years as an advisor to the players, and before every game he would tell them what kind of studs to use on their Adidas shoes.

The Miracle of Bern and “Fritz Walter’s Weather”

In 1954, the West German National Football Team (“Die Mannschaft”, as it is more commonly known today), took the world aback when they reached the final stage of the World Cup competition. Reaching the final was already more than what anyone could have expected. Few would have guessed that a war-torn, divided country like post-war Germany would achieve such a performance. Coach Herberger’s boys defeated Turkey, Yugoslavia and Austria en route to the final, but the stellar team of Hungary, then nicknamed “The Mighty Magyars”, seemed to be more than a match, especially after the defeat the West German side suffered against them in the group stage, a bitter 3-8 loss.

On the day of the final, positive signals came “from the heavens”, since, by noon, grey clouds had gathered over the horizon. This was excellent news for the captain and goalscorer of Germany, Fritz Walter. He could exhibit his best football game on wet conditions on a heavy and soft surface, as he had contracted malaria during the Second World War in a concentration camp in Maramureș, which made it very difficult for him to perform under the hot sunrays. Walter had been a star ever since his youth, scoring a hat-trick on his debut match against Romania, aged 17. They used to say the skies unleashed “Fritz Walter’s weather” and this expression is still in use today in Germany whenever the weather is particularly rainy. Nevertheless, this was by no means enough to generate higher hopes for the Germans. With players like Ferenc Puskás or Sándor Kocsis in the line-up, the Hungarians were expected to obtain an easy win and secure their first World Cup after years of dominating the world football scene. 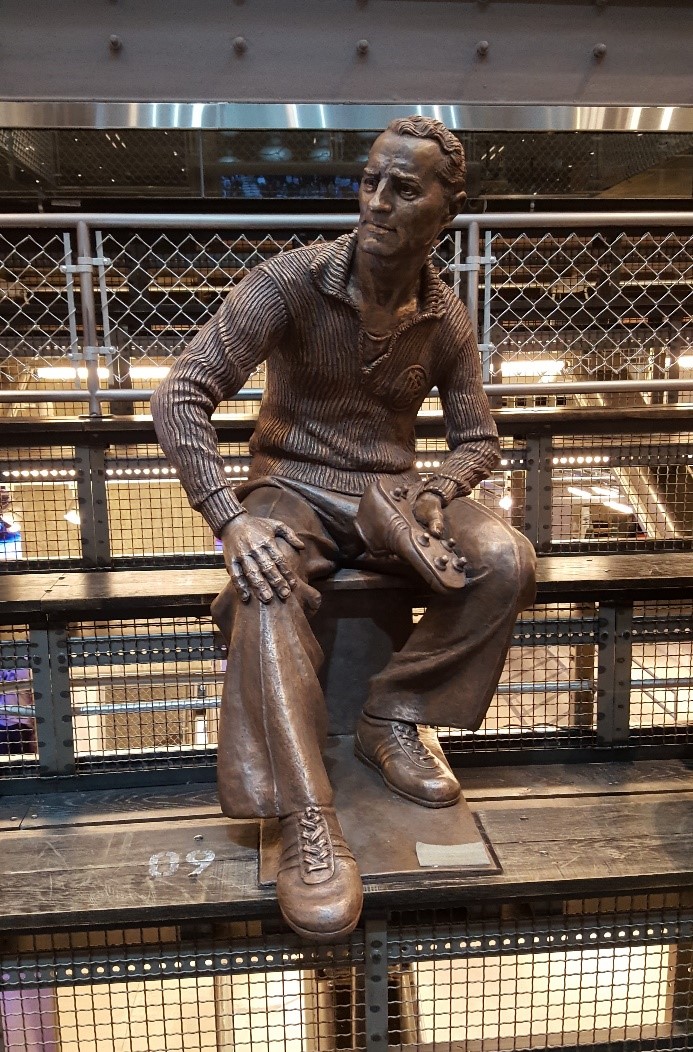 The Element of Surprise

“Adi, studs on!” – little did anyone know how coach Herberger’s words would be decisive for the outcome of the final. The weather conditions were “optimal”: after a quiet and sunny morning, the weather suddenly changed and at the hour of the match there was a heavy downpour. The match would be the first televised World Cup final ever. The players were provided with Adi’s latest model of football boots, “Argentinia”, which had adjustable screw-in studs. They had no reason to mind the tough weather too much, while the Hungarians’ boots would get stuck in the mud and have a difficult time properly sprinting and controlling the ball.

Even so, the Germans had an awful start of the match, conceding 2 fast goals to Puskás and Czibor in the first 10 minutes of the match. However, to everyone’s surprise, the next 10 minutes belonged solely to the German side, as they managed to even the score through Max Morlock and Helmut Rahn. Both goals were assisted by Fritz Walter himself. At half-time, Mr. Dassler pulled the trump card out of his sleeve. He instructed the players to adjust their short studs to longer ones, as the weather was getting even wetter and the pitch would then become more slippery, so more stability was needed. Returning to the field, the Germans were incredibly fast and seemed not to be bothered at all by the mud and dirt which were a real burden for the opposite team’s short and ineffective boots. All this time, as he sat next to coach Herberger, the Bavarian shoemaker was pondering the positive impact his shoes had on the players.

The wet field thus upset the balance of the match in the decisive half of the match. The quick Germans were targeted by numerous incursions of the much more technical Hungarian stars, but they delivered a heroic resistance and an incredible defensive performance with goal line clearances, blocked shots, desperate sliding tackles and goalkeeper Toni Turek’s heroic saves. The 84th minute was the one which produced the miracle on the pitch of Wankdorf Stadium. Hans Schäfer managed to steal the ball from Bozsik, passed it to Ottmar Walter, Fritz’s brother, who hit the back of the net with a fine low shot to the left, which slipped beneath goalkeeper Gyula Grosics’s gloves. “TOR! TOR! TOR! TOR! Tor für Deutschland!” Commentator Zimmermann went silent for 8 long seconds after his huge outburst of joy. “Goal for Germany! Germany lead 3-2! Call me mad, call me crazy!” This was one of the most famous pieces of commentary ever performed on a football game.

In the 88th minute, the German attendance was rendered silent when Puskás scored, but after a few moments his goal was ruled offside! The last chance for the Hungarians to even the score had passed. The final whistle meant that “It’s over! Over! Over! Germany are the World Champions!”, as Zimmermann famously put it.

Adolf “Adi” Dassler immediately became a symbol upon his return to Germany. People were becoming more and more aware of the major contribution he had in the competition the country had just won. Mass-media deservedly dubbed him “The Nation’s Cobbler”. This victory was more than a great achievement in sports. It was also a genuine revival of the West German nation and spirit after a long period of international scrutiny because of the relatively recent world conflict. The match had been the first official event where their anthem was played after 9 years. “In one 90-minute match against Hungary, modern-day Germany was born”, said historian and publicist Joachim Fest. “Das Wunder von Bern” is a 2003 movie which illustrates how this German “miracle” was made possible. Besides many other interesting and unknown facts about the day of the final, it tells the story of a disorientated and contradictory society which was looking for a path to follow. The movie also reminds everyone how the unexpected weather helped Fritz Walter play astounding football and how coach Sepp Herberger acknowledged the importance of Adi’s boots with special and innovative screw-in studs. Today, only one German player of that mesmerizing team is still alive: Horst Eckel, aged 87.

In Communist Hungary, the situation was quite different. Not only was the defeat a failure in an international sports competition, but it was a social and psychological loss. The authorities would use the fame of the football team to boost their popularity internally and overseas. Protests emerged in the communist state. Gyula Grosics, the Magyar goalkeeper who was later arrested by the oppressing regime, said afterwards that, although they had been told by the Hungarian communist leader Mátyás Rákosi that they had no reasons to be worried about unwanted repercussions, he “knew that it meant exactly the opposite”, for hundreds of thousands of angry Hungarians were demonstrating in the streets against the team and the regime as well. “Those protests, I believe, had sown the seeds of the 1956 uprising” (i.e. the Anti-Communist Hungarian Revolution of 1956). The players had no choice but to see their relatives being menaced and fired from their workplace.

Almost 66 years later, with over 57.000 employees from over 100 countries, Adidas is one of the most well-known companies in the world. Its legacy resides in the hundreds of millions of Adidas shoes, clothing items and accessories and the famous trefoil logo can be seen everywhere as a symbol of a successful company which, like many other startups, “saw daylight” in a dull place like a laundry room. Saved from bankruptcy in 1989 by French businessman Bernard Tapie, it has sponsored numerous prominent athletes like Muhammad Ali, Zinedine Zidane, David Beckham, Derrick Rose or Lionel Messi. To this day, the main headquarters of the company remains located in Adolf Dassler’s native town, Herzogenaurach, as the fingerprint of an entrepreneurial mastermind which decided the fate of probably the most unexpected World Cup Final in the history of the most important football competition in the world.

Majumdar, A. (2012). The Miracle of Bern – A Game That Changed Germany and Hungary Forever [Online]. TheHardTackle.com. Available at: http://www.thehardtackle.com/2012/a-game-that-changed-germany-and-hungary-forever-the-miracle-of-bern/.

Schwär, H. (2018). The History of Puma and Adidas Began in this House. Business Insider Deutschland.