Fighting epidemics, or stopping them from spreading, has a cost. The direct costs of the COVID-19 pandemic are, of course, deaths and the sickness that prevents people from working. However, the indirect effect or Economic Cost include the labor supply of the people who die, the hours lost due to sickness, and the hours lost due to people caring for family members who are sick, and the hours lost due to preventative measures. This will lead to rising costs of doing business in each sector, due to disruptions of production networks, and shifts in consumption as a result of changes in household preferences.

COVID-19 cases have surpassed 175,000. In just one month, the outbreak spread from Wuhan (Chinese city) to 160 countries on every continent except Antarctica. Almost 7,000 people have died. Outside China, Italy recorded the highest number of infections and death cases. Italy also recorded the highest number of infected people as a percentage of population. The current active cases in the country is almost twice that of China. Because COVID-19 differs from past episodes, such as SARS in 2003 and the Avian flu in 1997, the economic risks also differ. SARS was also a coronavirus but had a much higher case mortality rate (10%) compared with COVID-19 (between 2%-4%) and a much lower-case mortality rate than Middle East respiratory syndrome coronavirus “MERS-CoV” (34.4%) and the Avian flu (60%); on the other hand, COVID-19 may be more contagious than SARS and more similar in contagion to Avian flu. There is still a great deal of uncertainty about COVID-19 which is what makes it overly concerning. Another concern is the fact that all these viruses broke out of China(except for MERS-CoV), which is a much bigger and integrated part of the world economy; hence any economic disruption in the country will have much larger spillover effect than outbreaks from other parts of the world.

Policymakers are still finding it difficult to formulate an appropriate macroeconomic policy response due to uncertainty surrounding the disease evolution and its economic impact. The United States Congress is crafting legislation aimed at stemming the economic fallout, while the Federal Reserve is trying to stay ahead of the disruptions and economic slowdown caused by the rapidly spreading coronavirus. The Federal Reserve announced the second cut to interest rate in less than a week from the first cut. The emergency action on Sunday night was to slash its benchmark interest rate by a full percentage point to nearly zero and launch a massive $700 billion quantitative easing program. This cut is the first emergency measure since the financial crisis in 2008. 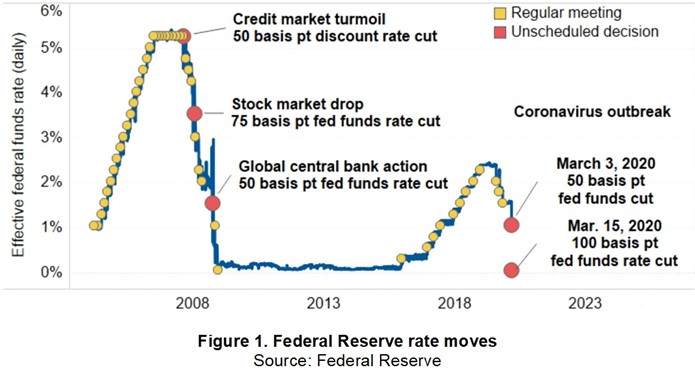 The quantitative easing will take the form of $500 billion of Treasury paper and $200 billion of agency-backed mortgage securities. The Bank of England earlier announced an emergency cut in interest rates from 0.75% to 0.25% in response to the economic impact of the coronavirus outbreak, and the People's Bank of China is targeting adjustments on the exchange rates.

In addition, in a global coordinated move by centrals banks, the Federal Reserve said the Bank of Canada, the Bank of England, the Bank of Japan, the European Central Bank, the Federal Reserve, and the Swiss National Bank took action to enhance dollar liquidity around the world through existing dollar swap arrangements. Meanwhile, France has called for Europe-wide fiscal stimulus. Unlike the 2008 crisis, where banks needed a desperate infusion of cash after they lost a bet on subprime mortgages, this time, they need governments to step forward to stimulate the economy.

Governments may need to find money to bail out airlines; the industry stands to lose $113 billion in revenue. According to new estimates from the International Air Transport Association (IATA), the losses incurred by airlines could be much higher than originally anticipated. IATA predicts that airlines would suffer 11% ($63 billion) loss in passenger revenue this year. That is a 115% increase from a previous estimate of $29.3 billion issued on February 20th. 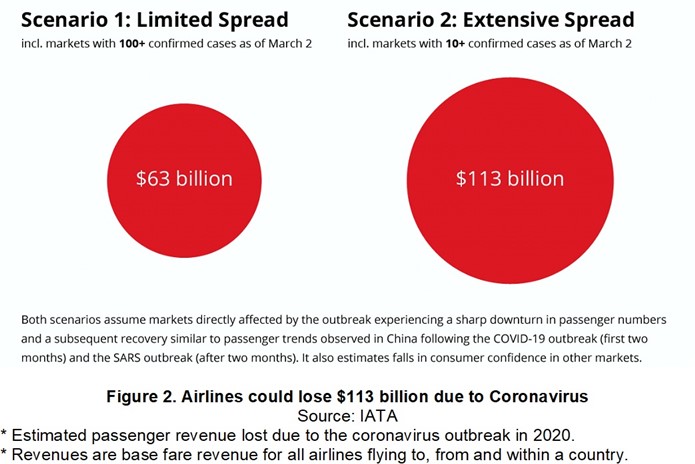 The turn of events as a result of COVID-19 is almost without precedent. In little over two months, the industry’s prospects in much of the world have taken a dramatic turn for the worse. Airports Council International (ACI) Asia-Pacific said the cancellation of flights had led to lower airline landing and parking charges, a decline in passenger and security charges and a drop-in retail spending that was hurting airport operators. Stefano Baronci, Director General of ACI Asia-Pacific lamented that they are faced with immediate cash flow pressures with limited ability to reduce fixed costs and few resources to fund capacity expansion efforts for longer-term future growth.

The situation in the aviation industry is not unconnected with the new reality in the tourism industry. Due to the fundamental people-to-people nature of the tourism sector, many countries have placed restrictions on travelling and some have even banned flights, which of course negatively affected global tourism. Let not forget that tourism is the 3rd largest sector of the EU economy, employing 27 million people (11.7% of all EU jobs) and generating 10.3% of EU GDP, not to mention the importance of the industry in other parts of the world. The likely impact on the EU tourism industry from January to the end of April 2020 is a possible loss of approximately 400,000 Chinese travelers (third largest source of international visitors) and 2 million nights in hotels. The United Nations World Tourism Organization (UNWTO) is expecting a negative (1-3%) growth impact estimated at a loss of $30-50 billion on international tourism. Russian commercial flights will be limited to EU capitals and only to and from Sheremetyevo Airport in Moscow. The Czech Republic closes its borders, almost no-one will be allowed to enter or leave the country. All flights from Turkey to Germany, France, Spain, Norway, Denmark, Belgium, Austria, Sweden and the Netherlands are halted until 17 April. Effective from 13th March, all India tourist visas and overseas citizenship of India entries are suspended until at least April 15th. The United States as well placed a travel ban on foreign nationals that have been to a country within the Schengen area in the past 14 days.

The downward economic effect is going beyond the airline, tourism and hospitality industries. The International Chamber of Shipping estimates that the virus is costing the industry $350 million a week in lost revenues. More than 350,000 containers have been removed from global trade. Port calls in China have dropped by over 30% since the beginning of 2020 and total throughput in Chinese ports has fallen by more than 20%. A drop of 20-25% in global shipping industry throughput is forecasted, and this will have a corresponding impact on the port terminal industry.

As a result of the factory shutdowns in China during first quarter 2020, many disruptions have been felt across the supply chain, though the full effects are of course still unclear. Considering that Wuhan, the epicenter of the COVID-19 outbreak, is often referred to as “China’s Motor City”, the automotive sector is among the industries most exposed to the negative impact of the pandemic. Not only will Chinese production suffer a significant hit due to extended shutdowns, but many manufacturers around the world who rely on Chinese parts are also facing production outages as it only takes one missing part to stop a production line. A mixture of parts shortages, staff welfare and confirmed cases are combining to cripple European vehicle production. Fiat Chrysler Automobiles said production for its Fiat and Maserati units would stop until 27 March at the Italian plants of Melfi, Pomigliano, Cassino, Mirafiori, Grugliasco and Modena, while factories in Poland and Serbia will also close. Ford will shut down operations at its plant in Valencia, Spain, as three staff members tested positive for COVID-19, while Volkswagen Group is suspending production in Slovakia and Martorell, Spain. Renault-Nissan will also stop manufacturing at its plants in Barcelona and northern Spain.

In counting the economic cost of the COVID-19 pandemic, the world economic growth is expected to halve this year to 1.5%, the OECD warned in its worst-case scenario for the outbreak, and this is a growth rate generally considered to indicate a recession. The World Bank has pledged $12 billion and the IMF has set aside $50 billion, pledging to help poor countries with the most vulnerable health systems, including providing emergency funding. A strong dollar, lower commodity prices and depressed demand will keep nominal trade in recession for the full year 2020. In the first quarter of 2020, global trade suffered from the equivalent of the 2019 full-year trade war between the U.S and China. Allianz estimates that losses of trade in goods and services could amount to $320 billion per quarter due to business disruption. On Monday 9 March 2020, the Stock market worldwide plunged as oil fell 30%, while all the major U.S markets are now in “bear” territory, meaning they have lost 20% or more from their recent highs. The declines in London stock exchange wiped some £125 billion ($153.38 billion) off the value of major UK firms. The significant fall in oil price could cut costs up to $28 billion on the 2020 fuel bill (on top of those savings which would be achieved as a result of reduced operations) which would provide some relief but would not cushion significantly the devastating impact that COVID-19 is having on demand.

The outbreak has disrupted operations with prolonged impacts on business continuity, mode of working and growth patterns. Governments and business entities must respond to the crisis with both short-term and long-term actions to make quick fixes, increase resilience to future disruptions and prepare for growth.