Future Tense in the Job Market And some featuring tensions

Lately, in the community of futurists and the subgroup of Economics scholars / freaks, a theory or, better yet, a slogan has emerged, in support of the idea of the acceleration of the so-called Fourth Industrial Revolution (IR 4.0), based on automation, interconnections between machines and Artificial Intelligence (AI) / Internet of Things (IoT). According to this saying, expressed in a similar form by Martin Boehm in 2017, “4 of 5 jobs of the year 2025 have not yet been created”, which can be translated as 80% of the future (types of) jobs in the next 6 years do not exist today. Therefore, the statement is qualitative before being quantitative. This brief essay breaks this idea down to see if it holds water. We do contest neither the transformation of economy towards automated production, nor the growing impact of AI in present and future jobs. What is indeed put under scrutiny is the pace of adoption, on a large scale, of these technologies.

This statement can be analysed from the view of elementary logic. We may have two hypothetical scenarios:

Elementary logic allows this conclusion, but, it is extremely hard to believe that, in 6 years, we will have so many new specializations, in parallel with all of the old jobs.

The second hypothesis is more plausible and its first part is quite true: jobs do change over time, at least since the advent of rapid technological change. Still, the second part remains phantasmagorical for common sense. The time horizon is just too short for such a dramatic change.

In the theory of the early adopters of the robotic Industrial Revolution, this change in labour market needs will be determined by the adoption on a massive scale of robots and automatic intelligent production lines in the economy to replace manual / traditional / repetitive and low skilled work. This can be true in the long run, but again, the proposed timeframe by the mid-decade seems just too short to be feasible.

Still this knowledge is not always used in the practical sphere. There are so many inventions that never materialized into products or processes because of economic reasons or because of usage difficulties. Realistically speaking, not all knowledge finds its way into daily use immediately after its creation. The same situation may be encountered with the IR 4.0 automated machines.

Argument against the haste

There is a series of arguments supporting the consideration that more time is needed for such a dramatic change to occur in the labour market:

Any new system and any new technology need a maturation time as well as a period for market acceptance. In the pioneering phase of a radical new approach in technology, the elements are not fully optimized and therefore there is little reliability or there are scaling issues. Examples are many throughout history: at the beginning of the automobile era, the cars had weak performance and maintenance was frequent. Or think of software, when a new revolutionary application or OS is launched, it needs constant patching to correct the errors or the omissions. The same principle will apply to fully robotic manufacturing lines. In theory, they could operate round the clock, but, in fact, a whole series of problems may incapacitate the lines for a longer time. The main sector for this maintenance will probably be software related, since the debugging of such complex software takes time. At least a few years of trial and error would be necessary for a technology to overcome its principal limitations.

But the investors do not have the patience to wait and not a substantial appetite for risk. In fact, the aversion to loss for big companies is quite strong among decision-makers and shareholders. It is very likely that these investors will want to start with some small-scale pilot-projects before going fully on automation and IoT. These projects may be implemented and monitored for a few years before green lights are given for investment in fully automatic production and massive job reduction. So, by this argument, the time of 6 years could be way too short. Only the pilot-projects would take a few years at least, maybe as much as 10 years in some industrial branches. 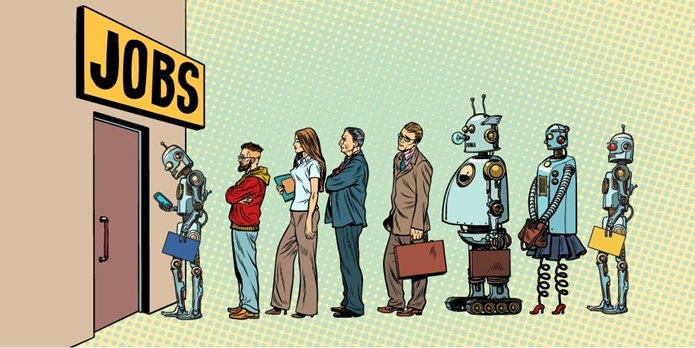 Let us assume that this tremendous change in workforce will happen in 5-6 years caused by an accelerated automation of manufacturing. What will be the consequences? Among others, we would face a “tsunami” of unemployed individuals. Just as an example, in South Africa for the mining sector there can be as much as 500.000 job losses if manual labour is substituted by robots (Harvey 2017). Who will support them? Who will allocate resources for every person that lost his job due to intensive robotics? The central governments and authorities, of course. Whether they are interventionist, minimalists or nationalist in orientation, it does not matter, the problem must be solved no matter what.

On the onr hand, this represents a huge extra load to an already burdened social security system that is felt in almost every state. Moreover, the main countries affected by the wave of job losses will be exactly the states with a significant unskilled / low skilled workforce, meaning exactly those countries that do not have great revenue for the social security budgets and that are in fact quite poor. Not even China, the second biggest economy in the world, could sustain a mass of dozens maybe hundreds of millions unemployed persons for more than a few months. Reconversion might work for a small part, but in the end it's not a lack of skills issue, it is a problem of jobs by figures. Simply put, fewer employees with better skills will be needed. What about the rest...

On the other hand, ignoring this problem leads to full scale anarchy and revolutions, therefore it is out of question.

One possibility (maybe the only one) is exactly from the companies that changed the production to robotic manufacturing, by imposing serious taxes. But, at the same time the company must pay for the investment in technology, which is usually made with credit or equity. If it is a massive investment, it implies high corresponding yearly debt service. So, the companies are already paying. And on top they would presumably have to pay extra taxes for sustaining the unemployed. This is in a situation where the economy is contracting because of low spending potential by the vast numbers of unemployed.

In this case, the calculus simply does not recommend such a dramatic change. More plausible is the adoption of automatic production equipment gradually, in order for the transition to be smoother and the avoidance of costs through gradualism. This means a longer period of combining workforce with automatic production lines, and this means that, for a longer period, the traditional jobs will still be available.

And then there is the government with its coercive power. In order to avoid the catastrophic consequence presented in a prior argument, regardless of political beliefs and doctrine, all of the authorities could impose laws and restrictions against massive staff layoffs. It is not a choice, it is an imperative. The alternative is courting social chaos and economic collapse. Maybe there will be quotas for layoffs or any other form of scheduling, but for sure they will span more than a few years (more likely it will be decades).

The automated production nullifies the need of competitive advantage provided by cheap labour, and there are theories that the manufacturing plants will be de-located from countries with inexpensive workforce in favour of locations closer to the main consumer markets (EU and USA). This may be true, but there are also other opinions that speak of Asia as the future prime market, consisting of more than 3 billion people with a rising standard of living and a bigger purchasing power per capita. At the same time, it might be harder to transfer a manufacturing plant if its integrated supply chain is already mostly located in the same place as a result of prior outsourcing strategies. So, in this light maybe the de-localization will be not so profitable after all.

From all the above arguments we can conclude that there are some de-motivational factors as well for the investors to embrace immediately the new technologies. And by this the necessity of job reconfigurations will be smaller than is advocated. We can definitely state that there will be changes, but nothing definitive beyond this. Maybe the rate of change will be more dynamic than ever before, but by no means will we see 80% of current jobs replaced in just six years. They said the same about the Internet, and it took 40 years to reach this level of penetration in human life. They said it for the mobile phone industry and it took approximately 30 years to reach this level – It seems there are as much as 7 billion mobile terminals in the world, almost one for every human being (Dorrier 2018).

There are two natural human tendencies: one is to reject all changes – under the influence of the fear of unknown – and there is also a natural human tendency to exaggerate things and to adopt all the clichés when the new marvels of technology appear – based on the hope of an easier life. But in the second case, the enthusiasm fades quickly, and the cold economic calculations take over and decide the real pace for implementing the new technology.

Unquestionably there are multiple valid arguments in sustaining of the IR 4.0 and its mutations in global economy; indeed it is actually happening right now. But one must not neglect the aspects that might hit the brakes of this technological soar.

Maybe it would be better to say “4 of 5 jobs of the future of our grandsons have not yet been created”, but even this may be too optimistic...