The data included in the autumn report of the World Bank, “COVID-19 and Human Capital”, which brings the forecast for Europe and Central Asia countries up to date shows the skepticism of this institution’s specialists regarding a rapid recovery of the Romanian economy, by reference to official estimates issued locally. Thus, the National Commission forecasted an economic decrease of -3.8% this year, followed by a recovery of 4.9%, which would bring GDP level in 2021 to + 0.9% above that registered in 2019.

WB data shows a significantly sharper decline (-5.7%), which, followed by the same growth figure in 2021, will not allow the economy to return to the pre-pandemic level until 2022.Significant for the balance in the foreign trade exchanges, which was problematic even before the onset of the crisis, the level of exports would remain even in 2022 by almost five percentage points below that of 2019. At the same time, imports, which saw a much smaller decrease during the crisis (-11% compared to -17.3% in exports), will increase by more than three percentage points. 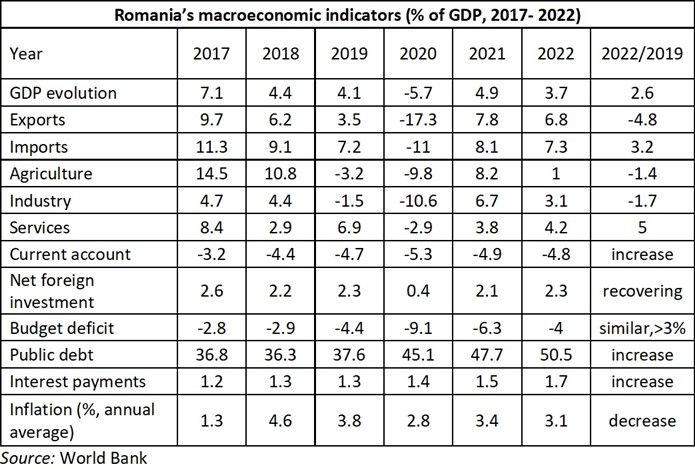 How economic sectors will recover

A recovery is what we all want, but it also matters on what economic structure as, unfortunately, we can see from the WB estimate, again more skeptical than the governmental one. It is important that neither industry (-1.7%) nor agriculture (-1.4%) will reach in 2022 the same production level from 2019. Worse, they will not even reach the level of 2018, because the decrease in these key sectors began before and was unrelated to the pandemic crisis.

The segment of the economy that will recover quickly in 2021 is that of services, where the figures provided by the WB are close to the official ones, with a slightly more optimistic result in government statistics (+1.2% CNSP compared to +0.8% WB for 2021 – we remind that we do not have updated national data for 2022 forecast – with + 5% 2022/2019 according to the WB).

The current account deficit is also an indicator where estimates are divergent, with significantly higher values ​​in the WB forecast. Here the problem is that we have already exceeded the limit allowed by macro-stability indicators (-4% the average over the last three years, -4.1% has been reached in 2019) and, if the figures advanced by the WB are confirmed, the situation will worsen towards 5% of GDP in 2022.

As expected, the support coming through foreign direct investment, conjecturally diminished by the problems faced by investors in their own countries, will resume gradually, to reach in 2022 the (not very great) level of 2019. Under these conditions, the budget deficit would rise to 9.1% of GDP this year (8.6% in the official forecast) and would recover towards -6.3% of GDP in 2021 (anyway much better than what both the European Commission and its own Fiscal Council warn, since they predict double-digit values ​​if a 40% increase in pensions is implemented).

However, the 50% threshold in public debt will be crossed in 2022 and public debt interest payments (presented as the difference between implementation and the primary balance indicated by the WB) would increase significantly. From 0.2 percentage points below the middle of the 3% fiscal range allowed by Maastricht criteria (suspended for 2021 but not for 2022), we will go towards 0.2 pp above, which is not at all a good sign for the amounts available for investment.

Inflation and prices. Getting out of relative poverty – 4 years of going round in circles

Finally, surprisingly, although the value for 2020 is similar, values ​​presented for the average price increase in the next two years are significantly higher in WB’s assessment than that of BNR by 3.4% compared to 2.6% (quarterly average) in 2021 and 3.1% compared to 2.5% (average for H1 2022).As a result, the shares of the population below the international poverty thresholds will recover after the pandemic-induced shock, but will not reach in 2022 the level of 2019.