Building the Future, One Blockchain at a Time

The European Center for Excellence in Blockchain[1] (ECEB) was founded in Bucharest in 2017 by the National Institute for Research and Development in Informatics (ICI), the Idea Factory Think Tank and Old Dominion University (Norfolk, Virginia, USA) as a as a promoter of the Blockchain issue and its link with the protection of Critical Infrastructures for state institutions and for the private sector (i.e. finance, energy, etc.), both nationally and internationally. It seeks to foster an understanding of blockchain issues on the part of decision makers and to encourage the development of key applications for use in governance, such as that of critical infrastructures. It will cooperate with both public authorities and private actors to facilitate a sustainable exploitation of blockchain potential.

The Center will pursue, through national, including private, European and international projects, the development of Blockchain's use capacities through internships and international training courses, initiating formulas for international cooperation in this respect, organizing events in Romania, to participate in relevant international events, to promote and support forms of regulation of the Blockchain issue by the Parliament, the Government, responsible authorities and others.

ECEB organized a one-day workshop on blockchain issues as part of the official schedule of the third International Forum for Critical Infrastructures in Bucharest (23-27 April 2018), organized by IF Think Tank in cooperation with the Romanian Parliament and ICI Bucharest. The workshop was attended by an important number of foreign guests, from countries such as the United States, the United Kingdom, Israel, Japan, Turkey and others. The participants represented a wide variety of stakeholders, from governmental officials, representatives of regulators, representatives of companies in beneficiary sectors such as finance to private companies providing blockchain solutions.

The ECEB plans, in the following period, to:

The blockchain concept, as described in the graphic primer below by PwC, is the basis of cryptocurrencies such as Bitcoin. It is a technique for maintaining a distributed database that is almost impossible to defraud, thereby potentially solving the issue of “trust” in transactions and other forms of record keeping. This has significant potential in a wide range of fields.

In addition to the cryptocurrency boom, in number and value, that has recently occurred, there is an effervescence of blockchain related projects, which identify new applications for the technology, as well as improve on its basic characteristics to increase functionality. This functionality is related not only to the safety and capacity of individual blockchain networks, but also the speed with which changes are processed, the relative cost of the distributed processing, and other capabilities, such as those pertaining to regulation.

The current volatility in the speculative market for cryptocurrencies and various blockchains tokens reflects both the variability of capital chasing speculative profits, but also the uncertainties regarding the future regulatory framework for many blockchain applications, especially cryptocurrencies. Once the big players, such as the United States and China, as well as smaller players like Switzerland, Japan and South Korea will have created a minimal stable regulatory framework for blockchain, the amount of investment in the area will increase and we shall witness a wide scale adoption of blockchain applications.

The graphic below details some of the most important applications for blockchain which are currently being developed and which generally divide between running smarts contracts, supporting digital currencies, various financial activities and record keeping. The potential use cases are very numerous, and the figure below fails to mention all but the most important of them. Some of the others which can be mentioned are supply and production chain management, decentralized computing, peer to peer contracting for green energy and many more. 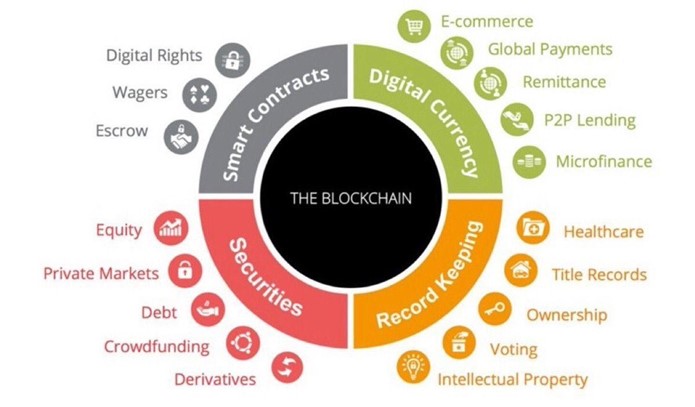