Rapid progress in today’s modern world is also generating a significant speed-up of the rate with which social and technological challenges rise up to hinder the peoples of the 21st century. Bulgaria, through its position on the crossroads of the Balkans, has a rather complex geopolitical profile, influenced by neighbouring countries, by EU and NATO and by global and regional powers like Russia, the USA and Turkey. In this context, a multicriteria approach has to be outlined for social, economic and security facets, in order to achieve a more concrete future analysis.

Present social dynamics in Bulgaria are driven by the emigration of the younger generation (for both work and education abroad), the low birth rates and subsequent shrinking of the population, the narrower educational professionalization paths oriented towards business needs, the growth in the elderly population, and the potential threat escalation with regards to minorities and migration dynamics[1]

The perspectives for overall country development are quite ambiguous, though areas like IT and mobile communications are expected to maintain a positive trend. At the same time, these ambiguities of reality drive up against the unrealistic expectations regarding the rise in living standard, due to some changes in the balance of political parties in the Parliament[2], the increase in Bulgaria’s external debt in the last few years and the limited growth prognosis for foreign investments, backdropped by positive international investor appraisals[3]. All of these factors are also superimposed on the unpleasant background of the global economic crisis that has marked the latter half of the period since 2000.

The industrial issues for Bulgaria are presently related to new energy projects of significant scope, innovative green applications, the production of high-tech solutions and the establishment of new business incubators and industrial parks. This area is, to some extent, independent from internal issues and influenced by world market demand and the changes of the digital revolution, but simultaneously generates a multilateral influence on the economic, social and security spheres of Bulgaria.

Since security is, in general, the most comprehensive facet of a country’s outlook, it is also a catalyst of the other two (social & economic) types of tangible and intangible changes.

Leaning towards general description, this approach is difficult to be highlighted from a comprehensive viewpoint without a concrete model. In this sense, it is important to note some efforts at describing these issues, such as the “SECurity RESearch and Change Management in the Security Sector. The Bulgarian Experience 1999-2008”[4]. It gave priority to the Euro-Atlantic development of the country but today, almost 10 years later, the fundamentals of these ideas are, to some extent, contradicted for multiple reasons. One may note the transregional military conflicts of Syria, Ukraine and Middle East, ISIS terrorist activities escalation, EU future disputes, the evolution of USA and NATO priorities, the natural Balkan tensions and the traditional competition for influence between regional powers like Turkey and Russia.

Establishing a model on this problematic is a rather challenging task that will be further developed in the broader context of social system dynamics, trying to arrange a discrete problem representation and drawing from independent research on these issues[5] [6], but with a narrower focus, centred on the country.

Further on, using approaches perfected also in other line of research[7], a probabilistic assessment model for system risks based on these comprehensive issues can be developed. Graphically, a generalized forecast, concerning Bulgaria’s outlook in the geopolitical context up to year 2020, is formulated below.

The model provides a possibility for practical formalization of a plausible future, implementing expert assumptions combined with public data gathered from heterogeneous sources[8].

The presented results highlight aggregated probabilistic risk lines from the complex combination of forward (direct) and backward (indirect) risks under the following approach:

- Critical risk priorities are most probably expected up to the year 2020 for: Industry Issues (9 on the model), Social Issues (1), Economic Issues (3) and Security Issues (2) for Bulgaria that are mainly passive in character (marked in grey), together with the recent rebirth of the Migrants (12) phenomenon. Unfortunately, Terrorism (6) and Military Conflicts (11) will maintain an active role (marked in white) jointly with the Regional Powers (4) and World Powers (5).

- Non-critical priorities are granted to: Neighbouring Countries (7) and Allied Partners (8) that will keep their active role (marked in white). Political Dynamics (13) and Foreign Investments (10) are expected to have significant but passive roles within the next three years.

Obviously, the presented system risk assessment approach does not show the complete picture of future dynamic geopolitical outlook for Bulgaria. However, it gives an aggregated system oriented mechanism for formal analysis that is capable of defining a progressive forecast with explanatory abilities.

What the reality will prove to be in Bulgaria, in general, is an arguable topic that could be also influenced by intangible factors like new strategic players or natural cataclysms that could not be anticipated with the necessary probability for adequate governance. 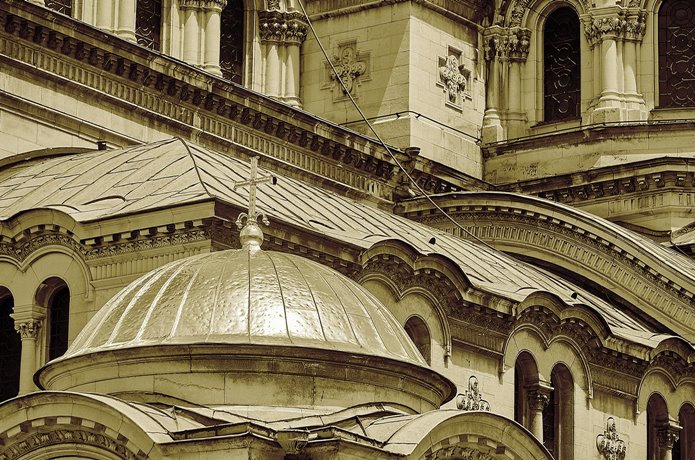 [5] Renders, J. 2052 (A global Forecast for the Next Forty Years ), In Club of Rome Reports, https://www.clubofrome.org/activities/reports/

[6] Tools for Institutional, Political, and Social Analysis of Policy Reform (A Sourcebook for Development Practitioners), The World Bank, 2007, https://siteresources.worldbank.org/EXTTOPPSISOU/Resources/1424002-1185304794278/TIPs_Sourcebook_English.pdf