The 21st century is believed to become the Asian century. In the last few years, China has introduced several economic and political initiatives which promote its rise as a global power. Embedded in its development and rise is the national space programme. Western observers tend to look at China's space programme as being small, slow, technologically less advanced and not significant enough. Is this a correct view of the current reality? Is China's space programme able to support not only national advancement in science and technology but also support global progress? Which role does the New Silk Road project play in this process? Is it possible to predict China’s near-term future in space? The authors, through consulting open source information and performing in-depth analyses, look to find qualified answers to these questions.

Review – The Beginnings of China’s Efforts in Space

To understand China’s space programme, it is necessary to take the societal and economic context into consideration. At a time when Western nations in Europe, the U.S. and Japan enjoyed economic development and prosperity, the Chinese economy rode on a rollercoaster during the periods of ‘The Great Leap Forward’ and the ‘Great Proletarian Cultural Revolution’. China’s firsts in space are embedded into these dramatic decades of the nation’s post-World War II development.

In the early years, the Soviet Union supported China in the development of ballistic missiles for military needs. The launch of Sputnik 1 on 4 October 1957 by the Soviet Union sincerely impressed the ‘Great Helmsman’, Mao Zedong. He wanted to have such a satellite for his own nation, preferable with the support of the Soviet Union. China’s space ambitions were not driven by a ‘race’. For China, the underlying principle was to catch up with leading technology developments in the world.

To that end, the Chinese Academy of Science developed a long-term plan for a comprehensive national satellite programme. In 1961, the Chinese leadership focused on the so-called ‘Four Modernisations’, one of which was science and technology.

After 12 years of hard work, impacted by economic and technical constraints and political and societal interference, China launched its first satellite, Dong Fang Hong - DFH 1, on 24 April 1970. The 173 kg satellite whose only task was to transmit the heroic Chinese song ‘The East is Red’, was more of a propaganda instrument than the starting point for a solid, sustainable science programme. China, however, became the fifth nation in the world capable of placing a payload into orbit.

After Chairman Mao’s death in 1976, Deng Xiaoping was responsible for education, science, and technology. And he had a vision:

In the second half of 1983 China accomplished the five major systems needed for geo-stationary access to space: launch vehicle, satellite, launch site, the tracking and telemetry equipment, and a network of ground stations. China’s first GEO (geosynchronous orbit) satellite finally launched on 8 April 1984, making China the 5th GEO nation in the world and enabled space applications for economic development.

China‘s human spaceflight programme came late into being, since its usefulness for national development was less obvious. But, after approval, it served as an ambitious project that would develop a national space industrial infrastructure and promote the education of the required talent and specialists. In 2003 China would become the 3rd nation in the world capable of human space flight. 10 years later, China fulfilled an old promise charged with significant symbolism when, during China’s fifth human mission, Shenzhou 10, female crew-member Wang Yaping succeeded in turning Deng Xiaoping’s vision of a classroom of unlimited size into reality. From aboard the Tiangong 1 space lab, she delivered a science lesson to 60 million Chinese students from space.

With the economic success at the turn of the millennium, China felt confident to go for bold visions, giving space a fundamental new orientation to meet the future needs of the nation. 4 ‘White Papers on Space Activities’, published in parallel with the respective five-year-plans explained the achievements and objectives of the national space activities.

The most important message reads:

In 2009, the document ‘Space Science and Technology in China: A Roadmap to 2050’ was published. Experts analyzed the strengths and flaws of China’s science community, the worldwide trends in space and technology, and came up with long-term goals and defined the steps necessary to achieve them.

The roadmap activity aimed at predicting the future developments of science and technology in accordance with the needs of the Chinese nation for the next 20-30 years:

Furthermore, it was concluded that growth by purely extending the economic production had reached its limit. China’s economic and social development will largely depend on science and technology through scientific discoveries, through the realisation of so-called ‘Mega Projects’ such as the Beidou navigation system, the High-Resolution Earth observation network, the ground station network, and through new inventions and technological innovation.

What we are witnessing today is that China has developed a robust, comprehensive and strategically-oriented space programme in order to serve its overall national development.

The next, intriguing, question therefore is: What has worked on a national level - could that be applied globally?

After China had proven that space infrastructure and space technology is a successful tool for economic and societal development, it offered its space resources to other nations.

China offers to use the CSS:

Within the Asia-Pacific Space Cooperation Organisation, APSCO, China is driving the use of space capabilities for socio-economic development. For that, the Small Multi-Mission Satellite - SMMS project - is one of its flagships.

Within the BRICS States (Brazil, Russia, India, South-Africa, China), the option of a joint space station is discussed and cooperation in the area of Earth observation data sharing and a remote-sensing satellite constellation is already underway.

Igor Komarov, Director of Roscomos State Corporation explained in May 2016:

Comprehensive space infrastructure – like the Chinese Beidou satellite navigation system and the Russian GLONASS – are ready to feed space applications, essential for the realisation of the ‘One Belt - One Road’ endeavour.

Since 1989, driven by security concerns, China embarked in Central Asia on a new neighborhood policy, supporting the now independent post-Soviet States in economic development and social stability. The proclamation of the ‘New Silk Road Economic Belt and Maritime Silk Road – One Belt - One Road’ project in 2013, is a continuation of this strategic move. For the revitalization of the bridge between Asia and Europe in order to address uneven global development – among other strategic partnerships – SCO and BRICS are of high importance.

The SCO – Shanghai Cooperation Organisation – is the biggest regional organisation to date. Its objectives are comparable to the Helsinki Accords/OSCE (Organisation for Security and Co-operation in Europe).

The ‘One Belt - One Road’ initiative is complementary to the Eurasian Trade Zone, an initiative by Russian President Vladimir Putin. He confirms: "For us, China is a key partner in the region."

The Vision: Connectivity – a Multi-Dimensional Infrastructure Network for a World Economy

The ‘Belt and Road’ mega-project of economic and societal development, comprises several major economic corridors, major rail, port and pipeline projects and maritime routes – which can be called the terrestrial infrastructure.

That terrestrial network is going to be supported by space-based resources - the ‘Space Silk Road’. Satellite navigation systems will support a so-called ‘downstream industry’ providing space-based applications. In China alone, navigation services generated in 2015 a turnover of 25 billion US-Dollars which should more than double by 2020.

‘Joint Laboratory Initiative’, ‘Science Park Cooperation Initiative’, ‘Technology Transfer Initiative’ and much more will enable a full integration of science and technology into a digital economy.

The state of global connectivity – enabled by this multi-dimensional infrastructure network, lays the base:

Such a model of a ‘Shared Economy’ “could unleash everybody's potential… promote social equity and justice…” as China’s Premier Li Keqiang, pointed out at the Opening Ceremony of the 10th Annual Meeting of the New Champions in Tianjin, in June 2016.

Economic dependencies – the biggest killer of creativity and motivation – are taken away and the traditional dialectical contradiction between capital and labour is fading. Science and technology are democratising the economy, most likely the global economy. This could become the optimistic vision of a human future for all people, or as Chinese Foreign Minister Wang Yi put it during a press conference in Beijing in May 2017: “the magnificent goal of constructing a community of shared destiny for mankind.” 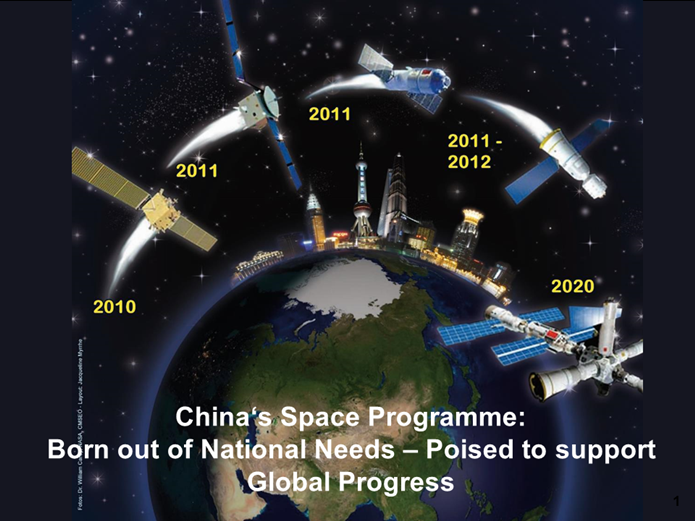 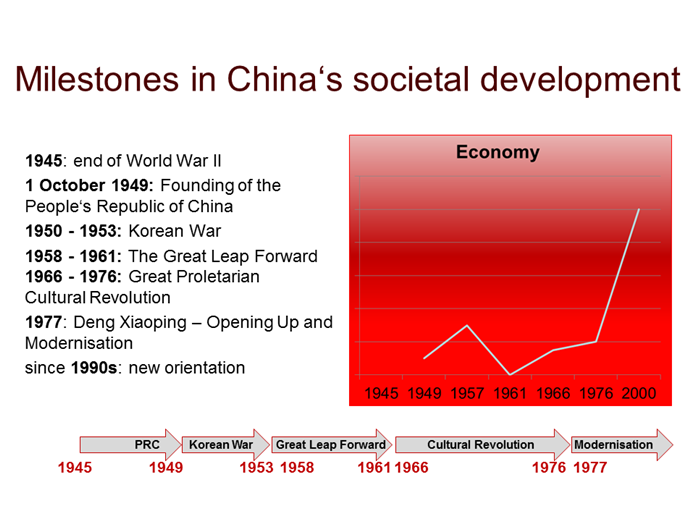 Chinas societal development after World War II is marked by several phases of societal experiments. Although their intentions were to advance the Chinese nation, the results have been devastation for the people. Only after the ‘Great Proletarian Cultural Revolution’ ended in 1976, did China enter a path of stable development.
Copyright: GoTaikonauts! 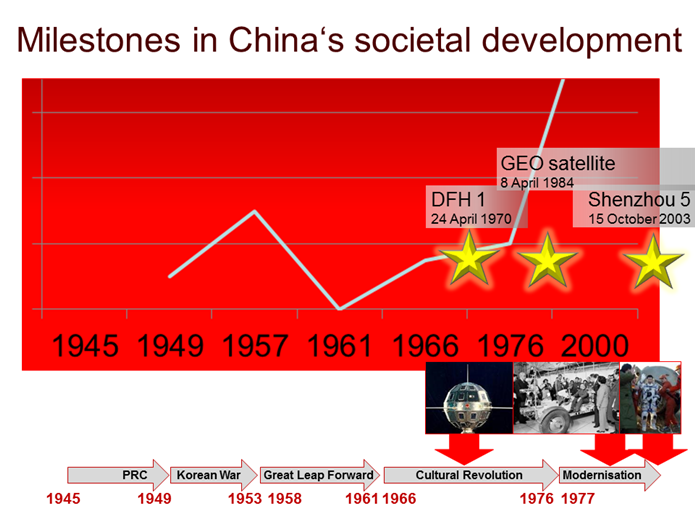 China’s firsts in space have been achieved despite unfavourable conditions for science and technology. The modernisation of the Chinese nation, initiated by Deng Xiaoping in the mid-1970s, laid the foundation for China’s space infrastructure and paved the way for ambitious space projects we see evolving today.
Copyright: CMSA, NASA, GoTaikonauts! 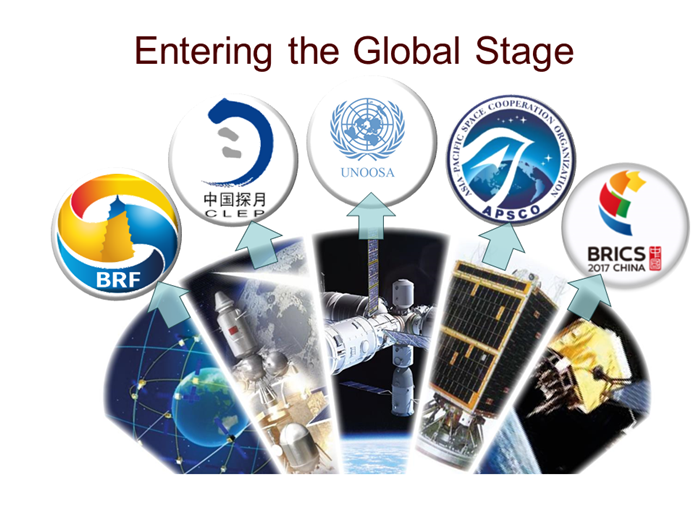 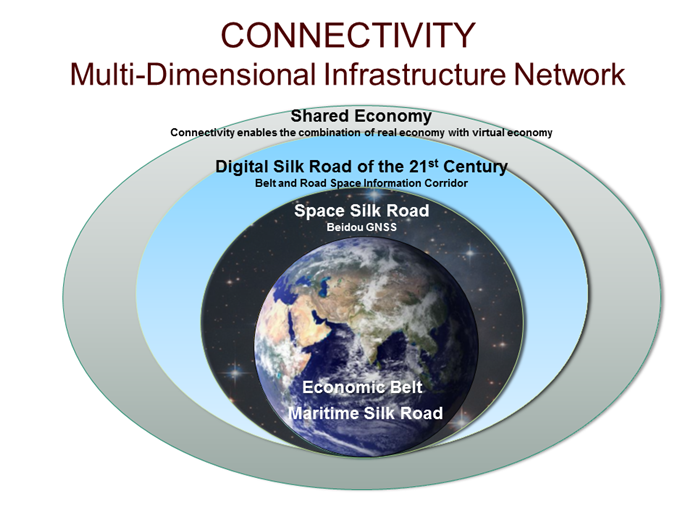 The ‘Belt and Road’ mega project can be defined as the terrestrial infrastructure, which will be complemented by space-based and space-supported assets, adding an extra dimension, an extra layer or shell, to the core project. Everything together enables the democratisation of a World Economy which not only empowers any person to master its existence, but also lives from the active participation of every single individuum.
Copyright: NASA, GoTaikonauts!