COVID-19’s Distributions and Balances of Power Professor CEZAR MEREUȚĂ: “Understanding this is the new challenge the most powerful leaders in the world have to face”

Who would have thought that precisely the most powerful countries on the planet, which invested the most in their health systems, registered the most cases of contamination with the new coronavirus? Well, an analysis by Professor Cezar Mereuță, Ph.D., reveals this apparently counterintuitive correlation. And it comes with a novel perspective: the pandemic plays the part of a parallel world, which seems to push the countries of the globe into an “odd” competition as if they would contest in “getting” as many contaminations as possible.

AM: How did you come up with the idea of connecting a topic related to nodal analysis to a health-related topic?

CM: Looking daily at the news broadcasts, I found that in the Top 4 of the countries with the most coronavirus contaminations we consistently find three countries belonging to the G7 group of the most developed countries in the world (USA, Japan, Canada, Germany, France, Italy and UK). This observation led me, based on data validated by the World Health Organisation (WHO), to calculate the share of the G7 group in the total worldwide contaminations. On April 22nd, 2020, the G7 cumulated 58.1% of the total contaminations. The calculated value is higher than the G7 share of world GDP, which is 42-46%.

AM: Can you remind us what is the “nodal analysis” and what methodology you used to make the correlation with the COVID-19 pandemic?

CM: In Economics, nodal analysis demonstrates the tremendous inequality in how the global turnover distribution of companies is spread. Basically, it shows that, in every market, there are very few powerful players and a lot of smaller players. The same principle is successfully observed when it comes to GDP distribution in the world: a small number of countries have a very large GDP. For instance, G7 countries, as I mentioned before, account for 42-46% of the world GDP. My work in this area has focused on industrial and market concentration and has shown that the old and often quoted “Pareto distribution”, of 20% of causes being responsible for 80% of the effects, is even more conservative than what reality shows us. Under such circumstances, we sensed that it would be useful to elaborate the distribution of coronavirus cases for all the countries of the world, according to the methodology of nodal analysis at macroeconomic level. The results are presented in the table below. Analysing the results, we find that the two distributions are similar, with the observation that the degree of concentration in the case of pandemic is higher than in the case of nominal world GDP. I emphasize that out of the first 6 ranks in the territorial distribution of contaminants, 5 belong to the G7 countries (except for Canada and Japan). 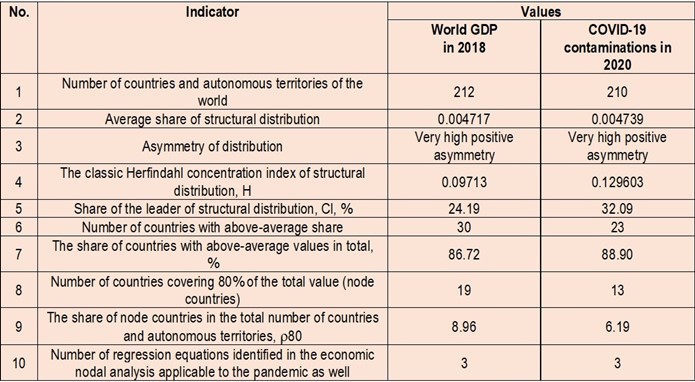 AM: What conclusion can we draw from the fact that the strongest countries register the most cases? Shouldn’t it be the other way around, that the poorer countries, with poorly funded health systems, register more cases?

CM: If the distribution of cases were relatively constant, you would be right about the number of deaths. Under the current circumstances, the distribution of cases being the one presented above, we may surmise that “the pandemic plays the part of a parallel world”, in which the 210 countries and autonomous territories that reported cases of COVID-19 (surveyed by the WHO at the time of my analysis, out of the 212 currently under observation) are engaged in a bizarre competition. The objective of such a competition is to “get” as many cases as possible. Ultimately, these are the countries that feature the most prominent global interconnections, especially as regards travel and trade. As nodes in the global web, they had early exposure to the virus, much more mobile populations and other factors besides that, though I would not want to comment on medical issues regarding the proportion of the elderly, the degree of institutionalization and so on. I am sure that many parallels and correlations are possible, including with economic complexity, number of kilometres travelled, population distribution (why New York is such an epicentre for the US crisis). This is a disease of the globalized world and the most globalized countries are the ones suffering the most from it. Having a high performing medical system helps keep a lid on the disaster, but I would not be so sure about the idea that wealth equals competent medical care during pandemics, because we are not talking about a normal situation, but one in which a disease features exponential increase. Not even the wealthy countries have enough extra capacity in their systems (number of beds, the ventilators and so on) to address any level of pandemic. And, from an economic standpoint, having money only goes so far in ensuring your ability to ramp up industrial production for whatever society needs in terms of medical supplies.

AM: Surely, the figures have the power of signalling. But our problem is with the “understanding” side, isn’t it?

CM: It goes a long way to it, but other factors count, such as degree of centralization of economic decision-making, or the degree of decisiveness in political decision-making, which is not something that the richest countries in the world are especially known for. Indeed, they are especially careful and ponderous, slow to act for fear of the consequences and requiring varied input for deliberative processes. One sees this in the mainstream reaction in the EU and the US to the initial travel restrictions, which were contested as authoritarian and not in tune with European or American values. Right now, we are witnessing fears in the US over the fragility of the supply chain for meat products, at the same time that futures contracts had oil worth less than nothing and an entire industry (shale energy) is going down. There is a cultural identifier for psychological studies that works quite well and goes beyond the economics aspect – the countries that are suffering the most and the longest are WEIRD countries (“Western, educated, industrialized, rich and democratic”). This is something to keep in mind when looking at the Taiwanese or South Korean successes with the coronavirus. I think that we will ultimately be able to do a nodal analysis based not just on coronavirus cases or deaths from coronavirus, but also extra deaths resulting from the disruption of supply chains, the postponement of medical treatment of other nature, the isolation of individuals and the downturn in the economy. I expect similar results there, because the countries with the highest economic impact of the virus are the ones with the highest added value and wealth to destroy, those dependent also on services and with industries and economic models which require human contact and mobility to work. Some of these reasons also apply to the extent of the 2008 financial crisis impact in the West, as opposed to other countries, when accounting for disruptions due to trade dependencies. In fact, I’m thinking of a more detailed study, based on the nodal analysis, devoted to deciphering this pandemic’s “distributional conundrum”, being inspired in this by my exchanges of thoughts with the editors of this remarkable publication, The Market for Ideas – Octavian-Dragomir Jora (Associate Professor, Ph.D., the Bucharest University of Economic Studies) and Alexandru Georgescu (Ph.D. in systems engineering) –, as well as with Professor Dumitru Miron, Ph.D., a constant supporter of my works.

AM: On the agenda of which policy makers should be included this correlation that you have made and what measures should be taken on its basis?

CM: In my opinion, frequent summits of the G7 group are required, to which it would be useful to add the Russian Federation and India, in order to launch policies to accelerate the research aimed at identifying the causes of the correlations presented above. Basically, we need to answer the question: “What are the factors that determine this behaviour of the pandemic?”. Obviously, in these meetings, the G7+2 group must insist on accelerating the process of finding the most appropriate therapy and the development of a vaccine. Of course, there is a limit to collective action and there are “free rider” problems that discourage such cooperation. Other countries are trying to exploit the situation for their own advantage, so trust is in short supply to dedicate to collective solutions. But no one will be safe until everyone is safe, even if countries meet eventual success in their internal control of the pandemic. As well, we should avoid a race to the lowest common denominator that overly insisting on consensus will get us. Countries are free to manage the situation as they think best, including in reaction to the decisions of other countries, but this does not absolve them from the responsibility to pool and share capabilities for a long-term resolution to this crisis.

AM: If nodal analysis is applicable to the current health crisis, does it mean that in the future it may be extrapolated to other areas?

CM: I think so. And the first check will be made next year at the Olympic Games in Tokyo, in which 207 countries participate. As it is said, we have to learn to live with the virus. But we have to outlive it.