There are millions of people who migrate each year. With the help of family and friends, they cross oceans, rivers, deserts and mountains. They risk their lives to realize a dream, which is to simply have a decent job somewhere that enables them to financially support their families back home, the same families who helped them before.

Worldwide, an estimated $689 billion (USD) was sent by migrants to individuals in their home countries in 2018, a 9% year on year (hereafter as YoY) increase from 2017, when the amount was $633 billion. Strong economic growth in major destination regions, oil price stability and the appreciation of currencies against the U.S. dollar helped fuel the first worldwide increase in remittances since 2014 according to economists at the World Bank. The 2018 and 2017 increases in remittances followed two consecutive years of decline in 2015 and 2016, the first back-to-back decline over three decades.

Most of the money ($529 billion) sent to home countries in 2018 was from the diaspora of low-and middle-income countries. This money amounted to 77% of the total world remittance stock, registering a constant YoY increase since 1999, except for the 1.6% decrease recorded in 2016. This is the result of a significant share of immigrants sending part of their paycheck back to help their families in their home countries. It is exceedingly difficult to fully capture the total remittances, bearing in mind that the reported data is the officially recorded data by Central Banks and national statistics offices. If informal channels remittances were to be included, its true size and social impact would be revealed to be much larger. This is especially true for Sub-Saharan Africa, where just 40% of the population use formal financial services and two-thirds of non-agriculture workers are part of the informal economy.

This is considered an important economic resource, making Nigeria the 7th top remittance receiving country in the world.

This money on the move competes with international aid as one of the biggest financial inflows to the country. It is 6.6 times larger than official development aid, according to a 2017 World Bank report, and 6.1% as a share of Nigeria’s GDP; while FDI only accounted for 0.93% of the GDP. At $24.3 billion, remittances are equivalent to 46% of the total exports of Nigeria in 2018.

Unlike private investment funds, remittances do not flow back to the source country at a sign of trouble or unfavorable government policy in the home country. Rather, they serve as insurance policy when the family is in trouble, facing difficult times or hardship, acting as a stabilizer to home country conditions. Unlike development aid that must go through government, remittances directly reach the migrants’ family members. Remittances are dollars wrapped with care, migrant sent home for food, shelter, daily necessities, family events, for funding the education of siblings and extended family members, for health care for the elderly, and serves as seed capital or continuous business investment. Migrants even send money home for unexpected funerals that they will not even be able to attend. For sure, the money transferred home tend to be more stable than other kinds of external capital flows, such as private investment. From the United States alone, the total amount of remittance payments to Nigeria is estimated to have been more than $6.19 billion or 25% of the total stick.

Remittances sent from the United States 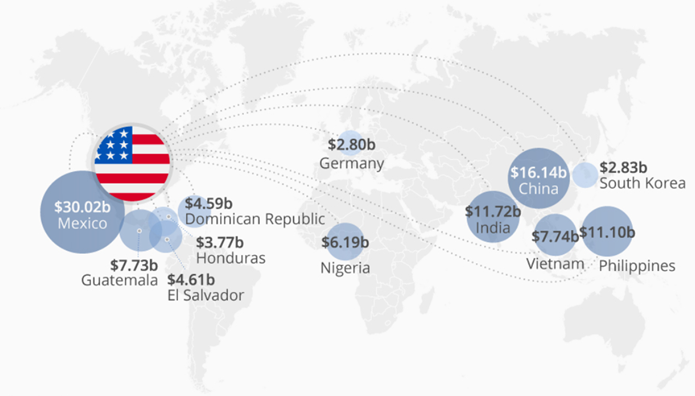 The United Kingdom is a close 2nd representing 17% or $4.12 billion. The data may also suggest that Nigerians are not only migrating to “greener pastures”, but to where their investment will have a good return, or to somewhere close to home and feels like home as shown in the figure below. Of the top 20 source of remittances we find nine African countries. Together, they accounted for 28.3% of 2018 remittances. Cameroon is the 3rd country as source of remittances after the United States and the United Kingdom, while Ghana stood at number 5 after Italy.

Studies have shown that remittances can reduce the depth and severity of poverty in developing countries, and that they’re associated with increased household spending on health, education and small businesses. How then do we encourage migrants to further increase remittances to better their home country economy, when the high costs involved in money transfers along many remittance corridors, particularly for poor workers who lack adequate access to banking services, reduce the benefits of migration, particularly for poor households in origin countries? The highest-cost corridors are mostly in Sub-Saharan Africa as shown in the below figure. These feature high transfer fees and, in some cases, (e.g., the Angola-Namibia corridor) also high foreign exchange margins. Even though the Sustainable Development Goal (SDG) target is 3% by 2030, the global average cost of sending $200 as of the first quarter of 2019 remained high at around 7%, according to the World Bank’s Remittance Prices Worldwide database. 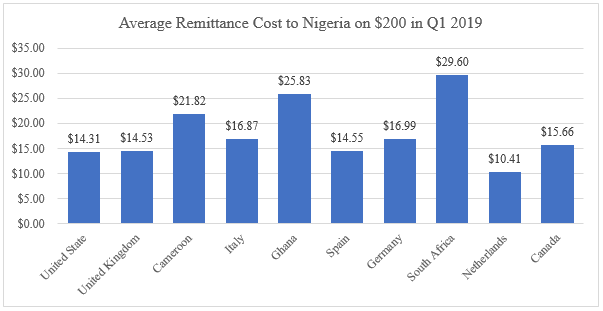 Most villages in Less Developed Countries depend on national post offices to receive money from their family members living abroad, and these post offices have exclusive partnerships with the big national or international banks or money transfer companies. This exclusive partnership leaves the sender no option even if the cost of sending money with such companies is high. Taking South Africa as an example, for every $200 sent to Nigeria, it will cost a migrant $29.60 as total transaction fee or the fee will be transferred to the receiver, hence the family will receive $170.40. Given the impact of remittances in the economy, governments need to recognize that small remittances are not money laundering; therefore it is necessary for governments to relax regulations for small remittances under $1000, and abolish exclusive partnership between national post offices and the big money transfer companies. Rather, it is recommended for government to open up any such partnership so that competition is promoted, and the cost of sending money is brought down.

Remittance flows have shown remarkable stability over time, and no doubt the rising trend in recent years is points to a related improvement in Nigeria’s economy.

World Bank. (2019). Account ownership at a financial institution or with a mobile-money-service provider (% of population ages 15+). Retrieved April 22, 2019, from https://data.worldbank.org/indicator/FX.OWN.TOTL.ZS?locations=ZG&name_desc=true