The Republic of Moldova is a very small state in the East of Europe, very far from the rich core of the continent. As an economy, it is one of the smallest in Europe, being the 41st largest economy of the continent (in Purchasing Power Parity methodology) and the 144th largest economy of the world, with a GDP of about 18 billion USD. In nominal terms, the size of the GDP is somewhere over 6 billion (6.8 last year, according to its own statistics). Small is not beautiful here: as an image for its poverty, the trade deficit is over 2 billion US dollars, about 30% of the GDP, and one fifth of the public budget is made up of foreign aid.

The Republic of Moldova is also one of the youngest countries on the continent, being born almost 26 years ago. Its borders are very confused, because, on the ground, the Republic of Moldova from the maps is broken by the river Dniester in two entities: the official Republic of Moldova (having the capital city in Chișinău, with 800,000 inhabitants) and the so-called (unrecognized) Republic of Transnistria. The population size is about 3.5 million (from the last statistics in 2004) and, among them, three quarters to four fifths are native Romanians (called Moldavians by the official records and by themselves), having small communities of Russians (6 percent), Ukrainians (11%), Găgăuzes (Cristian Turks, 3%) and Bulgarians (1%). Probably, one third of the population left their homeland, working and living abroad.

As a result of its history (being for about 100 years a part of the Russian Empire and for about 50 years a part of Soviet Union), the Republic of Moldova has a very controversial status, being on the one hand part of the Community of Independent States (CIS) and, on the other hand, being a potential candidate for EU accession and having an association treaty with EU. As a consequence, the preferences of the people are divided down the middle: half of them are supporting strong ties with the Russian Federation, half of them are supporting the EU accession process. Another consequence is the mixture of Eastern and Western influences in the political culture, in the business philosophy and in the day to day business of the country, with results that no longer surprise the beleaguered populace.

Instead of imposing the supervisory board or asking for bankruptcy, the central bank decided to give an unusual loan to the banks, using a medium term facility.

In 2014, the Republic of Moldova was ruled by a coalition of three parties: the liberal-democrats (PLDM) had the biggest stake in the government (including the Prime Minister Iurie Leanca), the democrats (headed by controversial oligarch Vladimir Plahotniuc) held the second largest stake and the third party was a small faction (PLR) of the liberals (PL), former ally of the liberal-democrats. The informal leader of the government was, de facto, Vladimir Filat, the president of PLDM and former Prime Minister (because of corruption allegations). The nominal Prime Minister was only a matter of window dressing, to appoint a good-looking guy to be shown to the West. 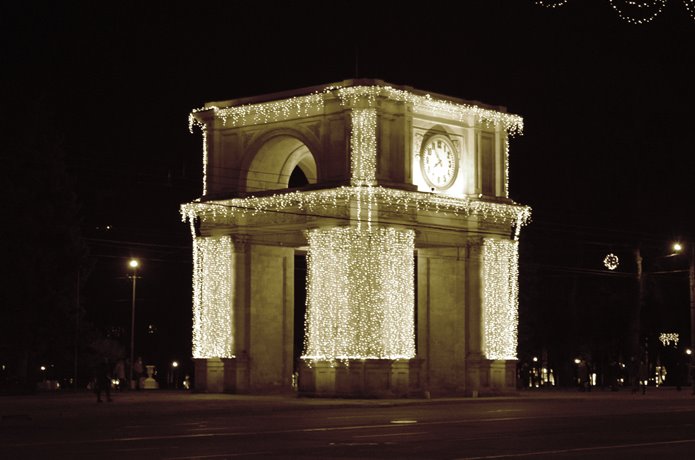 In the summer of 2014, because of the lack of regulations and enabled by corruption inside the central bank (BNM), some privately owned banks suffered a severe technical default; the organized crime elements took over the ownership of the banks (through a number of off-shore companies) and transferred the money from the banks to some unknown off-shore destinations using the credit facilities. The banks, called Banca de Economii (BEM), Unibank and Banca Socială, were technically in default and the central bank management should have imposed a supervisory board to run the banks, according to the relevant provisions of the law. Instead of imposing the supervisory board or asking for bankruptcy, the central bank decided to give an unusual loan to the banks, using a medium term facility.

Most probably, this solution does not come from the governor of the central bank, Dorin Drăguțanu, but from the informal leader of the government, Vladimir Filat, as the prosecutors revealed one year later. More surprises were in store by mid-November, when the government decided to guarantee the loan from the central bank to one of the failing banks (BEM) up to the amount of one billion US dollars. So, to be clear with the figures: the central bank issued a loan of one billion US dollars which is a third of its own reserves and the government issued a guarantee for the same sum, which is about one seventh of the whole GDP or about two thirds of the public budget! A few days later, the BEM officers transferred the entire one billion US dollars amount in several off-shore destinations, in just two days, the 24th and 25th of November 2014. The money flew to sunny destinations and the central bank (BNM) got stuck with the bill. By the end of the year, the government understood a terrifying fact – there was no way to avoid paying the guarantee, because all of the foreign partners, such as the EU, the IMF and the World Bank observed the enormous hole in the BNM`s reserves.

So, to be clear with the figures: the central bank issued a loan of one billion US dollars which is a third of its own reserves and the government issued a guarantee for the same sum, which is about one seventh of the whole GDP or about two thirds of the public budget!

By way of strange coincidence, the money was stolen just a few days before the parliamentary elections (30th of November in the same unlucky 2014), with the two parties PLDM and PD winning by a small margin, together with the liberals (PL). Also, the day the last of the money flew to the Virgin Islands, Chișinău receives the friendly visit of Klaus Iohannis (newly elected Romanian President), brought by Vasile Blaga (head of the Romanian liberals and old friend with the Moldovan Czar, Vladimir Filat)!

The so-called pro-European parties (PLDM and PD) established a fragile government coalition, with not enough seats in Parliament; this coalition failed two times in a non-confidence vote and the Prime Minister was changed two times in the year 2015. At the end of the year, another oligarch decided it was his turn to take the lead running the country and, as in a deep Russian tradition, the new czar prosecuted the old one: in mid-October, the General Prosecutor (the only relevant person Vladimir Filat did not control) asked for Filat to be jailed for corruption and the Parliament (now controlled by a new Vladimir, Plahotniuc) granted this request to the prosecutors. Filat, his star having already waned as a politician, was jailed for a very long time (currently a ten years long prison sentence). In the year 2015, simulating an excessive need for justice, the new oligarch nominated a foreign company, Kroll, to audit the bank robbery and to indicate possibilities of making good on the losses, but, as most expected, the conclusion was not much of a trace can be found and very little recovered. Today, the popular consensus is that there is no hope for the big money to be paid back to the central bank.

The solution is, according to the IMF agreement, to have government make good on the guarantee to the central bank from public money so, in the next two decades, over one billion US dollars from the public purse will be reimbursed to BNM.

The Republic of Moldova went into a deep crisis, with a two-year recession, a 45% devaluation of the currency and a worsening of a very bad situation for a very tired population. As a result of the crisis, the so-called “pro-European” parties failed to keep the presidential chair and, in last year’s elections, the pro-Russian socialist Igor Dodon took office. Meanwhile, the government coalition walked into the maelstrom of the crisis and finally (with the precious help of the government of Romania) succeeded in meeting IMF requirements and concluded a stand-by agreement. The solution is, according to the IMF agreement, to have government make good on the guarantee to the central bank from public money so, in the next two decades, over one billion US dollars from the public purse will be reimbursed to BNM.

If we have to reach a conclusion, it will be the following: some Russian–connected looters pay a visit to a small and impoverished republic to eventually make it smaller and poorer, by stealing a sixth of the GDP; corrupt politicians are part of the scenery, by winning the power and facilitating crime on a large scale and then losing the power, wealth and freedom for having facilitated the thieves. The population does not really participate in this movie: they keep themselves far from the core of the story, being manipulated to ask for a politician or another to be beheaded; at the end of the day, the poor population is the only one to pay the money back to the system, by going deeper into poverty. A sad story from the Wild East!