Mainstreaming Nationalism? The Case of the Law and Justice Party (PiS)

Most of the political parties in Europe face significant existential crises in terms of their weakening organisations, the narrowing public policy space, and their electoral support. In contrast, resurging nationalist and extremist parties gather momentum across Europe, benefiting from the growing wave of Euroscepticism. A prominent example of this is the main right-wing political party in Poland — the Law and Justice Party (PiS).

The edges have started to blur between the contentious parties. With the example of PiS we see how a “challenger” is moving towards the mainstream, gaining control of the national government or of a majority of the Parliament over several electoral cycles. This has a twofold significance. Firstly, it is important for us to see how such parties have moved from the periphery of the party system to its mainstream, as they also become noticeable in regional and international affairs. Secondly, it is important to understand their appeal to the electorate, and what are the policy issues they build upon.

Poland is one of the key actors in the European Union project, as well as the broader regional architecture of power. Like its fellow Visegrad group of countries (Poland, Hungary, Czech Republic and Slovakia), the Polish party system has been significantly marked by the rising prominence of nationalist or conservative platforms. The major political actor employing the nationalist platform to rise to power is the the Law and Justice Party (PiS). Its influence surpasses that of its competitors, as it became a benchmark for other parties following the same recipe for survival (e.g. Czech Social Democratic Party (CSSD) led by Milos Zeman – Czech Republic, or Direction - Social Democracy (SMER-SD) led by Robert Fico - Slovakia). Still, the most striking similarity both in terms of party platform and in terms of the leadership figure is with Hungarian FIDESZ. In support of this, we find an increase in joint statements and common stances on the part of Jaroslaw Kaczynski (PiS) and Viktor Orban (FIDESZ).

The prospect of a consolidated nationalist platform in Central and Eastern Europe (CEE) was not perceived as likely throughout the past decade, since the main competitor of PiS, the Civic Platform (PO) had proven to be highly successful in domestic elections. It also developed a strong presence at the EU level, with former Prime Minister Donald Tusk becoming the President of the European Council in 2014. The puzzle is to address how nationalist and Eurosceptic parties like the Law and Justice Party (PiS) have managed to rise to prominence, being powerful competitors in their domestic political scene.

The Law and Justice Party (PiS) was formed in 2001, as a splinter of the Solidarity Electoral Action (AWS) political platform. Political analyses suggest it capitalized on “the rapidly rising popularity of Lech Kaczyncki, who as Minister of Justice (June 2000-July 2001), was outspoken in his advocacy on tough measures against violent crime and corruption” (Jasiewicz and Jasiewicz-Betkiewicz, 2002). Its association with smaller nationalist and populist parties in Poland (e.g. League of Polish Families, Self Defense of the Republic of Poland) led to it becoming both an effective competitor on the national arena, as well as one of the biggest conservative forces within the European Parliament.

If we account for the relative positioning of PiS within the Polish party system (Table 1) on some of the main contemporary contentious issues today, we find it sooner settled towards the mean rather than the extreme. With regards to European Integration we find from the DALP expert survey data that PiS public discourse conforms to a policy stance that is more critical of the integration process than in favour of further integration. Still, both LPR and SRP are more Eurosceptic than PiS. With regards to the Church, we find the party system heavily polarised, with PiS and LPR fervently in favour of an enhanced role of the Church, and the successor SLD strongly supporting a complete separation. Finally, both the PiS and the League of Polish Families (LPR) have built their political identity on hostility towards communism and the Polish successor party, the Democratic Left Alliance. Nevertheless, PiS has not shied away from capitalising on the leftist niche, by promoting a resonant policy agenda (see Table 1).

According to some researchers (Smolnar in Pankowski and Kormak 2013, 162) the vision of the PiS leadership is “hierarchical, [revolving around] the nation, community, patriotism, traditionally-interpreted values, state paternalism, and social solidarity”. The ideology of the party is characterized as “national-conservative populism”, although in 2007 and 2011 a number of activists known for their far right views were absorbed and moderated by the party, and the party continued to collaborate and form a strategic alliance with Radio Maryja, a religious Polish radio station (Pankowski and Kormak 2013, 162).

The recurrent themes of the programs over the years were those related to the fight against corruption, a strong state direction in regard to economic and social policies; as well as nation and family values as core values. The party did not include references to the Christian democratic principles in its program, but after 2001 they have embraced the Catholic value orientation. In Table 2 we have synthetized some of the core economic and political orientation, social and value orientation, from 2001 to 2014.

Source: Compiled by the authors based on Millard 2010.

The table above highlights key aspects of the PiS electoral programs over the last 15 years, by grouping the economic, social political and value-oriented approaches in order to portray the manner in which it has ideologically revolved around gender and European issues. PiS’s core values have remained similar over the years: the statist-economic approach has been related to the political approaches to corruption and the fight against the “układ” – business oligarchs that have established dominant economic relations after 1989 in Poland (Millard 2010, 147-8); protection of the domestic market and keeping control of key enterprises. These approaches have changed with regards to issues of globalization and Europeanization (such as stepping back on issues incompatible with EU positions like the death penalty; retaining the independence of the National Bank or limiting the powers of corporations). PiS has raised numerous political controversies, with its approaches on lustration, the public media and judiciary system; or the European Union (by referring to Euro-realism - economic cooperation, but independence over policies).

The social orientation has revolved around the importance of the family and especially on family policies (e.g. Family 500+ program), as well as on housing and unemployment issues, health and education, turning to agriculture in the last years. Its value orientation on nation and family has been in conflict with liberal values that support women’s sexual and reproductive rights, LGBTQ rights, and assisted suicide and have placed importance to tradition linked to Christianity and the Polish national identity.

In order to better grasp these approaches, we have turned to the PiS 2014 electoral program for the 2015 Parliamentary elections. Using content analysis we coded paragraphs in which the following codes were present: EU, European, family, tradition/culture, PO (Civic Platform)—led by Donald Tusk, nation/nationalism as well as the Catholic Church. Our findings show that through framing, PiS have identified PO (or the “Tusk system”) as the source of the main economic and political problems in Poland, with the support of the media and the secret service; and the European Union’s liberalism as the cultural and social crisis trigger, through its gender ideology and values. According to our research, PiS attributed to these two actors, to the proportion of 27.9% (PO) and 25.5% (EU), the de-construction of the national consciousness and family values (30,4%) that affect all Poles.

Figure 1. Frequency of the Coded Themes 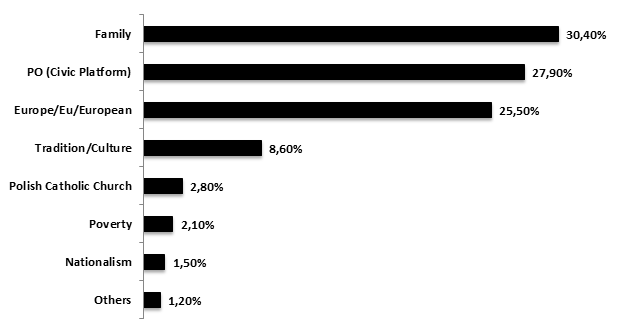 Our findings suggest that the PiS leadership embraces Euro-realism. National sovereignty of the state is preferred in order to build a strong economic position of the country in the international arena. It is considered that the position of Poland in the EU arena is peripheral and passive and it should be strengthened to become a subjective, independent co-decision maker. The membership in the European Union and the North Atlantic Alliance is treated as a tool for implementing Polish national interests and not as an end in itself, but as a means to enhance Polish status and interests.

Moreover, the educational reforms made before the EU accession and over the years have brought the educational system into a crisis and must be fundamentally changed into a system of shared knowledge, common symbols, references, ideas of Polish identity and national experience. This is a key-approach that shows how the members of the party use framing and argumentation to address the symbolic construction of the external reality, by blaming concrete actors, punctuating injustices in social conditions and actions that are needed to generate change (Snow, Benford 1992; Kluknavská 2014). We have thus framed a systematic analysis of the PiS electoral program and have identified what are the main problems, to whom they are attributed, who are the people affected by them and the solutions that PiS have given to these problems.