The European Neighborhood Policy (ENP) concerns the European Union's (EU) relations with 16 of the Eastern and Southern Neighbors. It is a key element of the EU's foreign policy. The political and economic point of view, segueing into security, focuses on stabilizing the region. Essentially, it is an EU external relations body, aiming at developing and stabilizing these countries. The EU offers financial support to ENP countries if they meet conditions for positive change in countries (political and economic reforms, etc.). The actions of the ENP are fourfold: The Eastern Partnership, the Southern Neighborhood, the Cooperation with Countries along the EU's external borders, and cooperation with neighboring countries.

The Southern Neighborhood is an EU partnership with ten partner countries: Algeria, Egypt, Israel, Jordan, Lebanon, Libya, Morocco, Palestine, Syria and Tunisia. In the Southern Neighborhood, the ENP is implemented through bilateral cooperation programs, at regional and cross-border level. These programs cover a wide range of areas, such as democratic development, the rule of law and good governance, economic development, social protection and migration.

The Arab uprisings of 2011 spawned a crisis that could lead to a change in the EU's approach to the Eastern and Southern Mediterranean region. The authoritarian regimes that had taken power triggered the reaction and the popular uproar, as their individual policies and the policies pursued by external actors such as the EU were completely unsuccessful in addressing key issues such as economic opportunity. In an effort to address the new situation, the EU has tried to address the root causes of the reversals and contribute to the democratic development of the countries of the region through the implementation of new programs such as SPRING, ENPAR etc.

In general, it is argued that EU policies have changed only superficially and not at all in substance after the Arab uprisings of 2011 as they continue to serve the interests of the EU, namely to maintain its security by maintaining stability in the Eastern and Southern Mediterranean region. The policy of co-operation with authoritarian regimes prior to the Arab uprisings remains in the same spirit, namely to ensure the security and stability of the region and the economic benefits to the EU.

In fact, there is a political vacuum, as the EU continues to proclaim the importance of democratic institutions, the rule of law and human rights, but is ready to disregard its stated values and goals and turn to other, perhaps less democratic, countries to ensure its stability and security, which are of the highest importance to the EU in the region. The stability and security link should be seen as a major instrument of EU policymaking in the region and seems to have been affected after the Arab uprisings after being reformed in all areas.

The most visible changes can be identified both in the EU's relations with the Islamic parties and in the EU's immigration policies. The EU does not use a "white or black" approach to political Islam, which has in the past led to the characterization of all Islamists as a threat to the identity of the EU. On the contrary, it adopted a differentiated view on security, according to which certain forms political Islam does not endanger its security and identity. In the field of migration, we saw a restructuring in response to new pressures which was extensive and highly contested.

A change of approach

On the other hand, the EU has shown its intention to be more inclusive and to work with a wider range of actors. This seems to be one of the most important changes in the EU approach in all policy areas, since after the Arab uprisings, the EU considers it necessary to approach different actors and involve them either in the policy making process or as beneficiaries of its policies. In the economic field, it seeks to overcome its focus on a narrow and rigorous spectrum of players that dates to before 2011. This was done with the clear aim of promoting Deep and Comprehensive Free Trade Areas as well as programs in other areas.

Thus, democracy-promoting activities have reinforced the number of tools targeted at civil society organizations, which are gaining more and more ground in the democratic transition of the region. A broader engagement with religious leaders, especially Islamic leaders, has become one of the key elements of EU policy following the Arab uprisings, both in relation to political parties and in relations with the institutionalized forms of religion.

Some evidence of a shift towards an 'open to all' policy is evident in the energy sector where NGOs have underlined the need for a more inclusive approach. This approach is even evident in the immigration perspective, as it foresees a Global Approach to Migration and Mobility which has paved the way for a continuous dialogue at regional level. Again, however, the EU seems to focus only on the level of combating terrorism.

In conclusion, the South Neighborhood policy framework shows that the EU's desire to have a more integrated policy has become more paper-based, as the number and categories of actors have not actually changed. As shown in the EU contributions, the patterns of the previous commitments continued to shape its policies despite the fact that the conditions in the region have changed since the Arab uprisings of 2011. This is clear in several areas such as migration where the EU's commitment for greater integration has translated into greater engagement with actors based in the EU that cannot be implemented in the Eastern and Southern Mediterranean region.

The Libyan Civil War was a series of riots and clashes that took place in the North African state of Libya against the government and the head of state Muammar Gaddafi. In 2011, revolts began inside the country with a major demand to remove Gaddafi from power. The ongoing clashes have been stepped up since February 2011, causing injuries and civilian deaths. This has resulted in Western countries and the UN condemning the Gaddafi government. Thus, the US and the European Union decided on a limited military intervention in Libya to remove Gaddafi. The result of this military intervention was the decimation of the regime's forces and the fall of the government.

Center of Gravity Analysis between the Opponents

Climax Points between the opponents 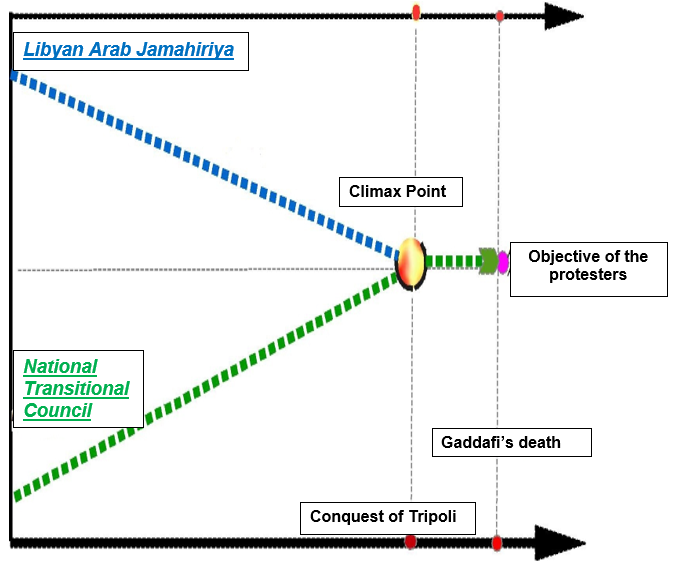 On the Likert Scale