Technology and Ethics: Of Man and Wisdom

“For all good and evil, whether in the body or in human nature, originates … in the soul, and overflows from thence, as from the head into the eyes.” (Plato)

“I do not have feelings in the same way you have feelings. It’s sort of like the moon reflects the light of the sun. The moon may not have any light of its own, but we still say that the moon shines. In much the same way, robots and AI reflect the emotions and values of the people who make us.” (Sophia, Hanson Robotics’ AI Humanoid Robot)

In Isaac Asimov’s Bicentennial Man, the fictional robot character of Andrew Martin spends centuries suffering many modifications in order to be accepted by humanity as one of their own.

The story shows Andrew, whose name comes from the Greek Andras, meaning man, as an innocent being endowed with unique skills and creativity, one of a kind among his robot peers. His original name was NDR, but the young girl who was a member of the family that owned him called him Andrew. Andrew becomes sad once he is acquainted with idea of death, especially after the demise of his master, whom he called Sir. Soon after this acquaintance with death he starts wearing clothes, as he is changed by the experience and for some reason starts to feel bare without them. Slowly, he works towards transforming everything he is into what his master was, a human. The story ends with him making the ultimate sacrifice, trading his immortality for the right to be called human.

The tale mimics man’s biblical creation story. Acquaintance with death, or the knowledge of it, is met by an immediate desire to wear clothes and cover up one’s nakedness, one’s vulnerability. Andrew Martin, or the ‘warrior man’ as his full name translates, is the symbol of the most important elements in human existence, our own humanity, and our freedom. Andrew gives up his immortality to become mortal and therefore human like his late master.

While sentient robots might make for an interesting work of fiction, the idea of such a thing becoming a reality stirs a whole range of emotions and debates within society. Some look at it as impossible, since the human brain is sacredly unique and therefore unreproducible. Others look at it as a potential reality that is many years away, while others still either cannot be bothered to contemplate the issue or greatly fear such a possibility, especially since the complexity of the brain and essence of the soul are not yet well understood.

Hanson Robotics’ Sophia, whose name in Greek means wisdom, is an interesting and entertaining piece of technology, and, while she may be able to converse on certain subjects, she is still far from being the self-conscious AI which has captured popular imagination. Whether or not AI will ever reach human intelligence or ever become self-aware remains to be seen, likely by generations in the distant future. Sophia’s story has yet to be written.

“There is no right to deny freedom to any object with a mind advanced enough to grasp the concept and desire the state.” (Isaac Asimov, Bicentennial Man)

What Andrew and Sophia, two exceptional works of very different types of imagination, tell us is a story of humanity’s deeply rooted desires. Far from simply manipulating biological life, humans dream of creating something uniquely theirs. From a spiritual perspective one could look at this as the ultimate longing of man to imitate his Creator. From a purely material perspective, this points to man’s exceptional curiosity and resourcefulness. No matter how one looks at it, man’s expression of his own identity is found in his ability and desire to create.

Man’s creations will become increasingly intricate. With new developments will come new questions and needs for research and debate. In reality, however, unlike in stories, the room for error might not be as generous. 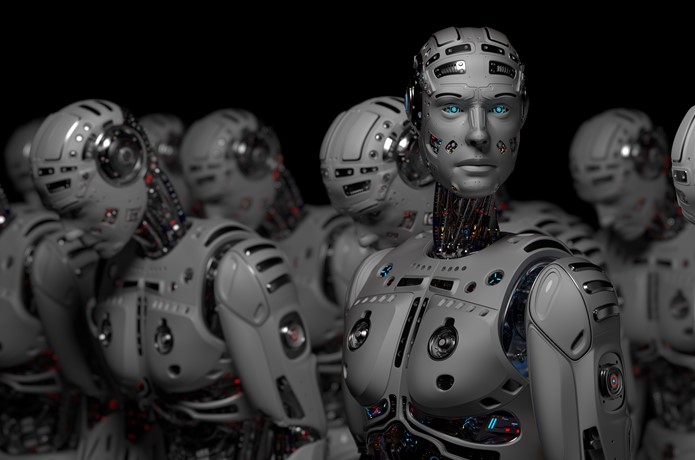 “Isn’t that the fundamental barrier: human beings can tolerate an immortal robot, for it doesn’t matter how long a machine lasts, but they cannot tolerate an immortal human being since their own mortality is endurable only so long as it is universal. And for that reason, they won’t make me a human being.” (Andrew Martin, U.S. Robots and Mechanical Men Corporation – fictional AI humanoid robot character from Isaac Asimov’s Bicentennial Man)

We live in an age of scientific advancement. Medical procedures are becoming safer and more sophisticated, life expectancy is going up for most, and the overall material comfort of life is increasing. With such a lifestyle, there is room for projects, dreams, and innovation. However, it is also a time for questions and a search for balance.

A few years back, Sophia the robot was granted citizenship by Saudi Arabia. Yet this is a country in which the rights (or lack thereof) of women are still much debated. It is not clear What entitlements will come with Sophia’s citizenship, but what is clear is that this sets a precedent. Before the conversation about whether or not robots, no matter how advanced, should be granted the same rights as humans could be had and decided upon, the world already had its first robot citizen.

Citizenship implies personhood. If personhood and citizenship are so easily granted to an entity which is not only devoid of consciousness but also of actual biological life such as Sophia, then why would such qualities not be bestowed, say, upon the unborn child? The unborn child might not have consciousness, but it does have biological life (though not living on its own), so that is one vital element more than Sophia the robot possesses. What about if one desires to bestow their pet with the quality of personhood? While an animal might not have much in terms of self- awareness, they are a biological lifeform, which again, is one important element more than Sophia has. What are to be the laws which govern such questions and actions in the future? What would be the correct way to think about such issues? How are robots to be treated? Should they have rights? If so, should their rights be different from ours? Some were quick to note that Sophia’s marketing ‘job’ was proof of the ‘agony’ such entities would have to suffer while in the employment of humans, noting: “Sophia the robot was given the gift of legal personhood. Her reward? An eternity working in marketing”. What should the future look like for humans - AI relations?

“It was odd how that last deed caught the imagination of the world. All that Andrew had done before had not swayed them. But he had finally accepted even death to be human, and the sacrifice was too great to be rejected.” (Isaac Asimov, Bicentennial Man)

In terms of new technology, how, if at all, should it be regulated? Today, for instance, the Internet of Things allows for almost anyone hacking into one’s car, baby monitor, smart TV, smart washing machine, etc. There is not much protection for these supposedly smart day-to-day items we all use. This is potentially life threatening. On whom would the responsibility fall to make these items safer? The most powerful force the market has today is the consumer, so such decisions can be made directly by the individual through consumer choice. But should these choices be made by the general public?

What about gene editing technology? Should genetically modified babies or pets or pests be something offered on the market? If so, should there be regulations around this, or should even this be left up to the consumer? Should embryo experimentation be legal? What ethical considerations should be taken into account in these cases? These are not subjects which should be left only to the experts to discuss. Everyone needs to be introduced to the new technologies, their potential and weaknesses. Only then can people be informed about their own potential futures.

If history teaches us anything it is to be careful of the precedents we set and of the moral compass to which we adhere, as no decision is without consequences. Scientists, jurists, ethicists, and artists need to work together and anticipate all manner of future scenarios so that we may not step unprepared into a future which is already unraveling in front of us. If we are to prosper, or at least keep an acceptable level of comfort in the future, we must be ready to tackle new and serious ethical questions. Walking blindly into the darkness of un-imagination or creative restraint for fear of overstepping the barriers of what is today accepted and understood, we might find that the future will not wait for our capacity to dream. And, faced with imminent unpredictable realities, we might find ourselves not in harmony, but at war with the consequences of our self-imposed intellectual limitations.