We no longer cultivate an understanding of history and art. Western democracies are increasingly relentless in denying their ancestors. The present sneers at the past with a sense of superiority that comes from simply being the present, with the ancient dead having no recourse or appeal against judgment rooted in contemporary bias. No other kind of ignorance indulges in current Western levels of self-flattery.

Thomas Cole (1801-1848) was an American landscape painter who turned his talents to allegory and unwittingly became a portraitist of the body politic. His “Cycle of Empire” was inspired by Antiquity and the Romanticism of his era, whose mood often turned melancholy. He would have almost certainly been aware of the works of Percy Shelley, whose 1818 sonnet Ozymandias ruminated on the folly of great men thinking their works can stand the erosion of time. Thomas Cole applied that same sentiment, but to the hubris of civilization in full flowering. The rise and fall of empires has been a constant preoccupation of the West, unlike any other civilization, perhaps seeking to avoid a similar fate. Decades later, Oswald Spengler would publish “The Decline of the West”, where he compared civilizations to organisms held together by a spiritual dimension, that start out young and vigorous, become mature and wise and then grow decadent until they ultimately fall. The “Cycle of Empire” fits this idea, with its transition from wilderness to pastoral tameness, then the full glories of civilization, before strife/war/hubris brings it down and leaves the ruins to be reclaimed by nature.

At the time of the painting, his United States were in a transition from wilderness to pastoral bliss, undergoing a rapid expansion westward whose “closing of the frontier” in 1890 robbed some defining element of the American spirit that the country subsequently tried to recapture, briefly succeeding during the Golden Age of Space, which was the height of what Spengler called “the Faustian spirit”. For American writer Gore Vidal, the “consummation of Empire” took place with the Spanish-American War of 1898, which saddled the US with the first of many unincorporated overseas possessions and coincided with the height of the “Gilded Age”. In his novel series, “The Narratives of Empire”, Vidal used fictional characters to anchor the story of a country that became “pregnant with Empire” and achieved maturity at the close of WW2, only to decay by the end of the Cold War.

While criticism of the US and narratives of Western decline abound, people generally do not take them to the logical conclusion, preferring a sort of slide into mediocrity that enables them to hold onto comfort and dignity. This seems especially feasible because of the gloss of high technology over a culture that increasingly lacks belief in itself and its obligation to “not go quietly into the night and to rage against the dying of the light”. If the West truly is in one of the latter stages of Thomas Cole’s vision, then a few illusions will have been dispelled – that of permanence and that of the Whig theory of history’s continued progress. Finally, let us remember how empires truly fall – slowly at first, and then suddenly. 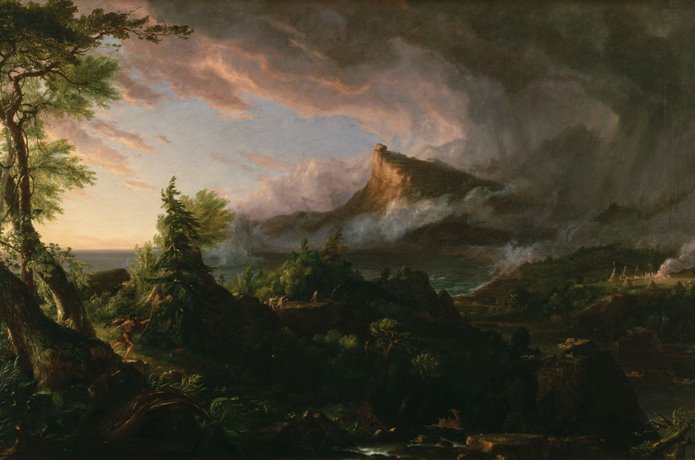 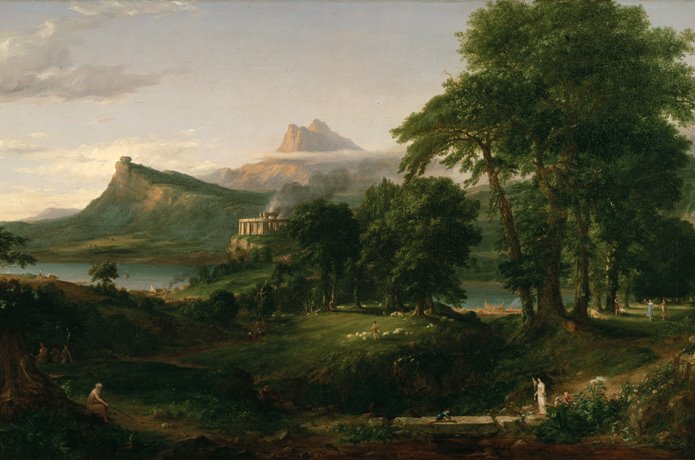 The Arcadian or Pastoral State. Oil on canvas, 1834 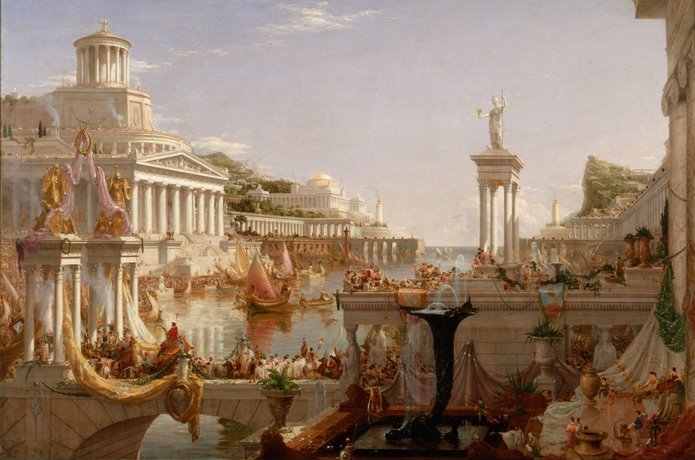 The Consummation of Empire. Oil on canvas, 1836 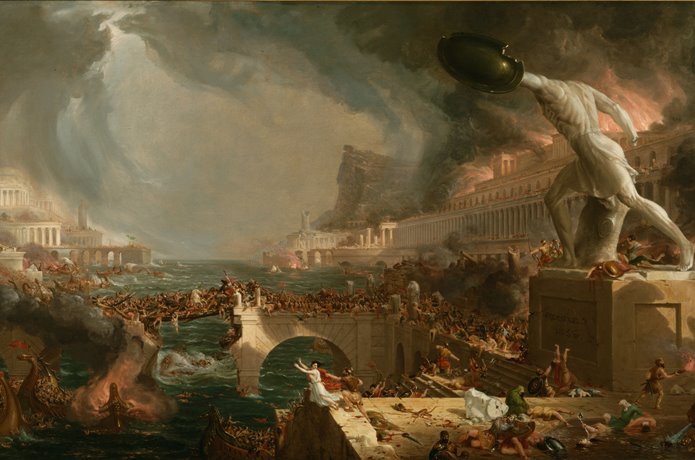 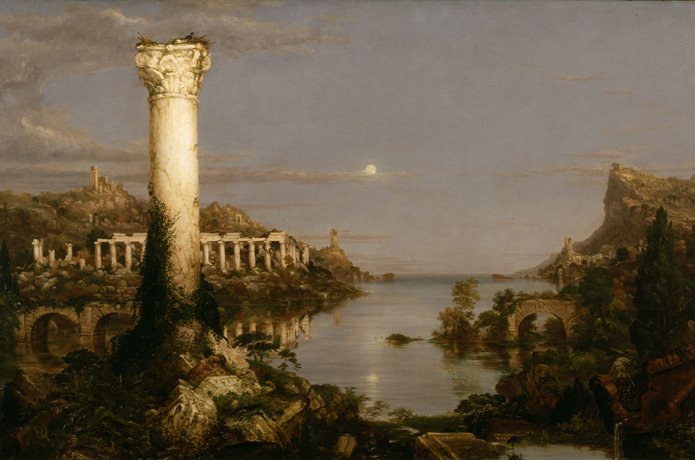