The challenge today is to analyse unemployment among young people from different generations in terms of understanding their values and attitudes, as well as their influence on the labour market.

The labour force is an important factor of production, but we cannot say about work itself that it is a commodity like everything else, because it involves a man with a whole system of values ​​and expectations that influence his individual decisions.

His work opportunities depend on factors such as age, health, psychology, spatial mobility, training level, skills, motivation. Man acts as a bidder on the labour market within a time horizon, upon reaching the legal age for work, and enters at a certain level that influences how the employer's demand for certain jobs is satisfied.

I will make a brief analysis from the perspective of unemployment, with an emphasis on NEETs (“not in employment, education or training”), with the assumption that my conclusions will apply for the entrance into the labour market of generations Y and Z.

The concept of demographic generation (GD) and its typology

It can be said that there is no agreement or a formal ruling on the age of work, which makes it difficult to fit in one of the cohorts of the generation, but there is an agreement that demographic segmentation can occur along the age groups.

If the demography gives a picture in numbers about society, there are different ways of analysing, from the perspective of social sciences, how people are formed, how people interact, what the values and behaviours of a cohort are, what motivate them or another. It is observed that the sets of data can been processed to paint a picture of similarity within the cohorts, and different labels can be attributed to generations.

I will propose an empiric-historical typology of generations, using the criterion of the age of work, which is a personal interpretation of some opinions from the literature.

I define the population cohort whose lifespan includes the age range of 15-24 years as a segmented, identified, localized demographic generation that does not have the meaning of the concept of general demographic theory.

Work is one of the core/fundamental values for builders.

An optimistic and active lifestyle created by hard work is specific for baby boomers. The next boomer generation (Jones) believes that you need to work and build your professional career continuously, to get to the top. They created the concept of “workaholic”.

The dominant principle of “work-life balance” (first family and then work) is a hallmark of X generation. They are independent, innovative and creative.

Y generation organizes its work around personal life, not life around work. They have a childhood in crisis and care for their money. They live in the present, they are sceptical and ironic.

The first truly global generation are the Z generation, who are connected 24/7. They are the most educated generation, being mature and serious, dedicated to and focused on their work. The word that defines this generation is “options”.

ALPHA is the generation of technology, connected and educated from early on. We have yet to see the rapport they will build with the idea of work.

Today, there coexist within society, the labour market, and, sometimes, even in households, up to 7 generations, and a knowledge of the characteristics of each of them is important to prevent a conflict, enabling the best decisions of leaders, managers, employers etc.

Are we ready for the two generations (Y and Z) who will reach the age of work and will become active on the labour market?

It seems that society is not preparing to accommodate and to integrate this generation. There is an unofficial label applied to some categories of young between 15-24 years – NEET.

Consequently, the dimensional and structural changes of the () are not only faster than in the general demographic generation, but are also much less predictable.

The () concept does not allow for internal structural variations between components (we will see the NEET concept, discussed below).

NEET (“not in employment, education or training”) is one of the indicators used for monitoring and analysing the situation of young people who are not employed and are not enrolled in an educational program or training and is carried out by EUROSTAT according to the LFS methodology.

Eurostat data shows in absolute numbers about 6 million young people in the EU belong to the NEET group. The indicator varies substantially between Member States, showing the unemployment rate indicator in European Union countries, according to the formula: NEET Rate = number of young people who are not employed, educated or trained divided by total youth population.

It seems to be a very good proxy indicator, and yet, questions can be raised about the inappropriate use of the NEET label for Y and Z generation members who, even though they may be hard to understand, do not all fall within the category of vulnerable young people, each having their own characteristics, needs and motivations for work. Williamson (1985) draws attention to the fact that the almost exclusively negative judgements pronounced on these young people lead to labels that do not allow for the reflection of the emerging crisis of young teens and do not give them a chance to affirm themselves for re-engagement and inclusion. Robson (2008), analysing the diversity of youth before the global financial crisis, shows that the people of this group do not want to work and to study, which is in itself frowned upon. Serracant (2013) points out that the public discourse and the media stigmatize young people by using the acronym NEET as a pejorative, giving the label negative connotations.

Elder (2015) claims that equivalence of their status only with unemployment and lack of desire to learn is not correct. In his opinion, the concept lies at the intersection of rejection, exclusion and marginalization on the part of society which can lead to unemployment and discouragement. He believes that there is a possibility that some disability may not allow them to work and they are thus marginalized by society. He also emits the hypothesis that certain family obligations limit the attempts to find suitable work, leading to rejection from employers and hence to their own discouragement.

The literature evokes the idea that the indicator does not reflect the phenomenon completely and correctly, so one should strongly avoid the term NEET as a label for genuinely special generations. It is incorrect and risky to link NEET status to a lack of values and to attitudes that are averse to labour on the part of these cohorts.

Being a new concept, even for research, in a rapidly changing world, it took some time for it to be understood and mostly absorbed by policy makers. A part of Y generation has reached adulthood by this time and has already been put on the sacrificial block by misunderstanding and mismanaging its needs and motivations for work.

Data on the duration of unemployment, the reasons for not having started a job or the reasons why a young person cannot begin work within the next two weeks is important and can be used to separate the NEET categories. Based on the statistical data already available at EUROSTAT, the following categories of NEET were identified:

This diversity and the combinations must be taken into account when policies are drawn up for the purpose of effective reintegration of NEET in the labour market and in education.

By NEET, I understand the cohort to which () refers, but is defined in the 15-24 age group, and I propose a logical analysis of the concept and a new definition. Since the NEET concept refers to the age group of 15-24 years, in order to avoid possible confusion, we propose a more specific: YNLET (Youth Not in Labour, Education, Training). The 4 YNLET tag’s predicates of sufficiency can be used to describe the logical formula YNLET 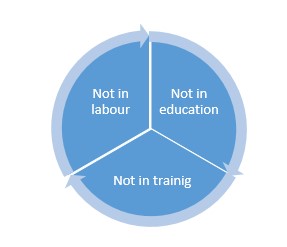 Inputs and outputs can only be in GD, that means it is an I / O pool

The option may be constrained or free

The three sides are rigorously equal

YNLET cannot be eradicated in principle because under a free society there may be individuals who make such a choice (we do not exclude positive consequences, including for the society, from the existence of YNLET).

If we think back to Hayek, who said that social progress is conditioned by economic polarization, it can be said that here, in YNLET, individuals are more likely to be in economically superior layers.

There is a reciprocal structural and functional relationship between YNLET and GD, and the link can also be analysed under the following aspects: flow and stock in YNLET, dimensional variation YNLET, qualitative assessment of YNLET, human alienation of GDI members, generative.

It is necessary to conceptualize the term NEET to capture the entire structure and qualitative aspects of the indicator.

Interdisciplinary methodology (economy, sociology, psychology) is needed to establish the relationship of demographic generations with YNLET and the labour market.

Adapting the individual, organizations, governments and economies to the information revolution takes special attention to the opportunities created by the new activities and jobs of the future, as well as a great capacity to manage change, where we believe that the main role will be played by Z generation and ALPHA.

Policies to reduce unemployment and increase employment must be geared towards active policies that prevent unemployment or contribute to activating the unemployed through requalifications, preparing appropriately those people who are actively seeking a job so that they can access new job offers and be able to take up the jobs they have occupied. At this point, policies are not adapted to the different characteristics of the YNLET category depending on the demographic generation they belong to.