A saying has it that numbers do not lie, however the parameters behind the numbers might be somewhat misleading.

The first quarter of 2018 saw a continuous growth in total capital importation into Nigeria, the fourth consecutive quarterly increase since Q2 2017. The total value of capital imported in the quarter stood at $6.3 billion, which is a year-on-year “YoY” increase of 594.03% and 17.11% growth quarter-on-quarter “QoQ”. This increase in capital inflow in Q1 2018 was mainly driven by portfolio investment, which grew from $3.5 billion in the previous quarter to $4.6 billion, accounting for 72.42% of the total capital importation during the quarter.

Although FDI was up 16.67% YoY in Q1 2018, this is a 34.83% QoQ decrease to reach $246.62 million. The current FDI figure represents a 19.4 percentage points decrease in the share of the capital importation composition. Equity investment, a sub-category under FDI, contributed $246.61 million or 99.9% of FDI during the quarter, while other capital under FDI contributed less than 0.001%.

The existence of multiple exchange rates is creating distortions in the economy, through the encouragement of portfolio capital inflows. 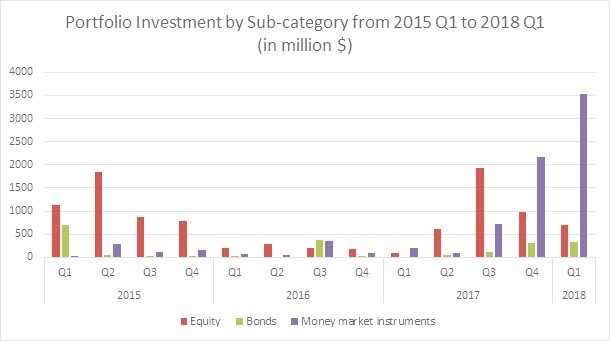 Finance exceeded Servicing, Production, and Agriculture sectors to become the third leading sector to receive capital investment, attracting $485.41 million during the quarter. This was followed by the Servicing sector with $328.15 million, Production sector with $144.09 million and Agriculture with $130.90 million. These six economic sectors mentioned above together attracted more than 96.2% of foreign capital investment. Telecommunications, which ranked fifth in Q4, 2017, only had a total of $87.25 million foreign capital investment in Q1 2018, declining by 54.32% QoQ.

The existence of multiple exchange rates is creating distortions in the economy, through the encouragement of portfolio capital inflows. Nigeria will perhaps maintain these naira rates until at least 2020, since merging them could force the government to weaken the currency and raise fuel prices, which would accelerate inflation, a situation the central bank is working very hard against, considering it is the selling point of the government.

To put things into perspective, the astronomical increase in the foreign capital inflow did not and will not result to any form of economic growth or make citizens better-off, due to the quality of the imported capital.

Some people might argue that the tight monetary policy stance and system of multiple exchange rates may have paid off, due to the slowing down of inflation and the managed naira exchange rate. However, this has led to increase in the cost of borrowing, and consequently reduced consumer spending and investment, leading to lower economic growth. Although tight monetary policy is meant to encourage savings, the issuing of bonds and treasury bills at high rate (17% ) by the federal government is crowding-out investment, and further encouraging rapid inflow of hot money (portfolio investment).

The raising of the minimum reserve ratio by the central bank also forces banks to keep more liquidity in banks or engage in Open Market Operations by selling long-dated government bonds. The cost of higher interest rates is thus a fall in economic growth and double-digit unemployment (18.8%) and youth unemployment/underemployment (52.65%). Therefore, to put things into perspective, the astronomical increase in the foreign capital inflow did not and will not result to any form of economic growth or make citizens better-off, due to the quality of the imported capital.