The Rise of Islam and American Policy in South Asia

The challenge of Empire to traditional constitutional order occurs when the first response to acts of terror increases the powers of the State. The Patriot Act and the attack on Iraq by the Bush Administration empowered a "war faction" in the American President’s Party and millennial fundamentalists who saw these acts in term of the “Last Days”. That places President Donald Trump in a position to increase his Imperial powers when confronting a rising Islam. Thus far, President Trump has chosen to withdraw American troops in Afghanistan and Syria. The real test is in relation to the Islamic regime in Iran. 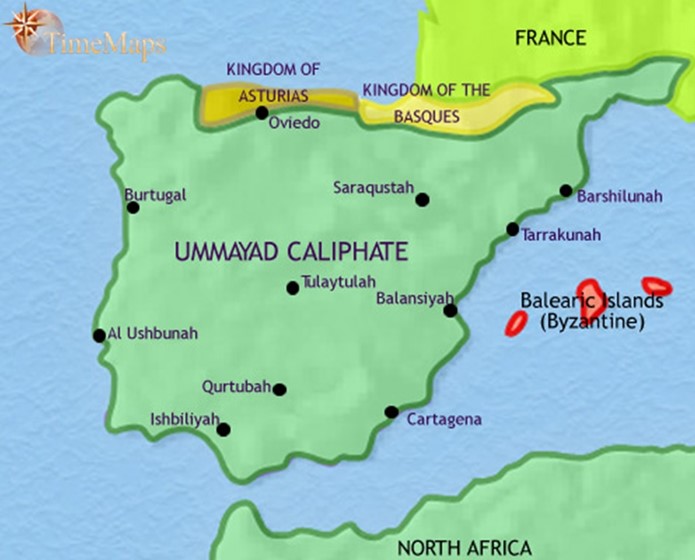 The rise of Islam

“Muslim” is the Arabic word for “acceptor” – those who accept the faith of Islam found in the Koran. At the center of the Muslim world is Islam – a community that is the kingdom of God on Earth.

Muhammad (c 570-632 CE) was the expositor of Islamic truth revealed by God to Muhammad through the angel Gabriel and written down in the Koran. The revealed word of God was disseminated by followers of Muhammad at far as India where first mosque was established in 629 and through the Mughal Empire which ruled most of the Indian Subcontinent between 1526 and 1857.

The Tang Dynasty (618-907 AD) found the first Muslims in China where they built the Huaisheng Mosque.

An Arab-Berber (Ummayad) army crossed from North Africa into Spain in 710 and speedily conquered most of the Iberian Peninsula, driving the Visigoth rulers into the Northern mountains. In 718, a small Christian army, led by the nobleman Pelagius, defeated the Caliphate’s army in the mountains of northern Iberia and established a small, but independent, Christian Kingdom of Asturias. The year 718 was the beginning of a reconquest of Iberia that reached its height in a war with the Emirate of Grenada by King Ferdinand and Queen Isabella from 1482 to 1492. 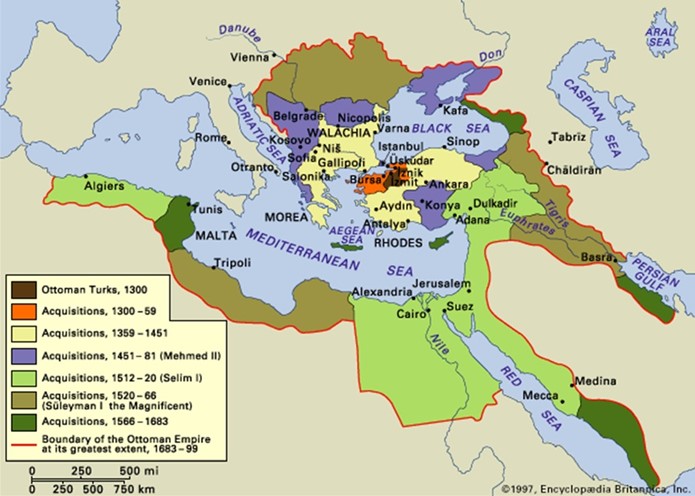 The Ottoman Empire at its peak stretched from the Caucuses, the Balkans and Anatolia to the Middle East and North Africa. Under Suleiman the Magnificent, it conquered Belgrade, Budapest, Rhodes, Algiers and Baghdad.

The Siege of Vienna in 1529 was the first attempt by the Ottoman Empire, led by Suleiman the Magnificent, to capture the city of Vienna, Austria. Conflict with Ottomans ranged from 1389 to 1683 and led to historic encounters between Ottoman Muslims and Christian regimes in the West:

Notable were four major battles – the Battle of Malta (1565), the invasion of Cyprus (1570) and the Battle of Lepanto (1571) and the siege of Vienna (1583). The siege of Vienna in 1583 signaled the pinnacle of the Ottoman Empire’s power and the maximum extent of Ottoman expansion in Central Europe. A second siege was waged from July 14 to early September 1683 by a vast Turkish army under the Turkish Serasker (Supreme Commander), Grand Vizier Kara Mustafa.

After fending off 18 major Turkish assaults, only a third of the originally 11,500-strong garrison in Vienna remained fit for combat and their munitions were nearly exhausted. Responding to a call for help from Holy Roman Emperor Leopold I, Imperial troops and additional forces from Saxony, Bavaria, Baden, Franconia and Swabia led by the King of Poland, John Sobieski, defeated Mustafa Pasha on September 11, 1683.

Islamic radicals such as Osama bin Laden and the so-called jihadists or Islamists, which includes the al-Qaeda network and its affiliates, signify a rise of Islam motivated by a radical Islamic political religion. That political religion accepts terror and violence and is rooted in a vision of an Islamic community in this world.

In February 1998, Osama issued a fatwa against Jews and Crusaders. Osama was not qualified to issue a fatwa, but by issuing one he sought to inform Muslims about a critical issue. His fatwa of 1998 called attention to “crimes and sins committed by the Americans are a clear declaration of war on Allah”[1].

Osama’s ruling directs Muslims “to kill the Americans and their allies – civilians and military – is an individual duty for every Muslim who can do it in any country in which it is possible to do it, in order to liberate the al-Aqsa Mosque and the holy mosque [Mecca] from their grip, and in order for their armies to move out of all the lands of Islam, defeated and unable to threaten any Muslim. This is in accordance with the words of Almighty Allah, ‘and fight the pagans all together as they fight you all together’, and ‘fight them until there is no more tumult or oppression, and there prevail justice and faith in Allah’”.

Accompanying the call to kill enemies of Allah is a view that “martyrdom is a heroic act of choosing to suffer death in the cause of Allah, and that’s why it’s considered by most Muslim scholars as one of the greatest forms of jihad”. This pronouncement was made by Sheikh Yusuf al-Qaradawi in 2004[2].

The desire to destroy, so that what is destroyed can be built anew, is a temptation that disturbed the West and the Muslim world shaped by the vision of Islam. Christian chiliasts and Islamic radicals equally allow a vision of transfigured reality to block out the reality of man’s creaturely being. Because of the depth of this “cross-cultural” disease of the spirit, radical Islam presents to public order in the modern world the supreme challenge of a disease of the soul impermeable to rational argument.

The term “political religion” might strike some as unusual. Most Christians and Muslims piously affirm the tenets of their orthodox spiritual traditions. But intellectual and mass movements have disrupted political order throughout the history of the West. In order to understand the rise of radical Islam as a political religion, we must appreciate these movements on the level of engendering “religious experience”, for the terrorism of Osama bin Laden and a variety of jihadists is a spiritual disorder.

Once before, when confronted with the threat of the political religion of Marxism in Stalin’s Russia, President Roosevelt was totally ignorant and made decisions whose ill-effects are felt even into the 21st century. After the attack on 9/11, the George W. Bush administration rushed passage of the Patriot Act. In war, not only does the power of government grow, but so also acts of law and policies that later are seen to be faulty.

The over-reach of the Patriot Act which permitted vast and intrusive monitoring of communications left a system of surveillance that in previous times would have been rejected on its face.

Taliban forces in Afghanistan led by Mullah Mohammed Omar hosted Osama bin Laden during the time he plotted the 9/11 attacks. That led to a retaliatory invasion and disbursal of Taliban from key regions. President George W. Bush decided to attack Iraq by arguing that Iraq had weapons of mass destruction. That destabilized the balance of power in that region and gave hegemony to the radical Mullahs in Iran which now is the source of weapons and terrorist activity. American forces have been stationed in the region for nineteen years. From 2001 to 2019, these engagements have cost more than $6.4 trillion[3].

Once radicals engage in terrorist acts, a policy that aims to kill and disperse them must be pursued. But there is no lack of scholarship which has identified the religious character of certain political movements. Military action cannot defeat a spiritual disorder.

Norman Cohn’s The Pursuit of the Millennium (1957), an analysis of medieval European religious movements which is perhaps best known, shows the similarity of these movements to the modern political phenomena of German National Socialism and Communism. These contemporary political ideologies, Cohn shows, are similar in structure to – and in some instances take inspiration from – what we today would call the fanatical, if not irrational, medieval phenomena.

Albert Camus’ The Rebel (1951) analyzes the variants of rebellion in modern speculation and the spiritual character of revolt.

Robert Tucker’s Philosophy and Myth in Karl Marx (1961) persuasively shows the origins of the thought of Karl Marx in the revolution in religion instituted by Idealist philosophy’s creation of an image of man as God.

But perhaps most important for analysis of the nature of modern political religions are the works of Eric Voegelin in which he argues that these political movements are essentially “Gnostic”. These works principally are The New Science of Politics (1952) and Science, Politics and Gnosticism (1959)[4].

Later, Daniel P. Walker and Frances Yates, following the work of Paul Kristeller, have shown the influence of Renaissance Hermeticism in the formation of modern political religion.

The mystery of reality as a process of participation in the divine origin of being was experienced by the classical Greek philosophers as a process pointing ultimately towards transfiguration of reality. Plato’s concept of the turning around of the psyche towards the transcendent Good beyond existence and essence in his Republic and St. Augustine’s concept of the peregrination of the city of God and the souls of men towards Christ articulate this experience. The ascent (epanodos)[5] of the soul to the Agathon in Platonic philosophy, just as the conversion of the soul to God of the Christian experience, articulates a transformation of the soul. Yet this experience did not occlude the simultaneous creaturely experience of the psyche in the world. The body which is en‑souled is also psyche which is embodied. Physical, creaturely existence is reality.

In radical Islam, the creaturely world is rejected as is the humanity of man and the goodness of the world and of material existence. What is left is only the transfiguring experience of Islam. This quest for a world in a transfigured state, but not in its present reality, is a principal formative element in the rise of Islam.

Note of the editor: This article is an excerpt from Chapter 9 of author’s book Rise and Fall of the American Empire.