Trump and the New NATO Paradigm

A specter is haunting NATO while Moscow dreams sweetly. Both are consequence of the new Republican President’s latest statements. This could lead us to believe that NATO might be under threat, not from the outside as one might expect, not from terrorism or from a resurgent Russia’s expansionist policy, but from the inside. This threat comes from the policy and perspectives that the US Administration seems to adopt regarding the essence of the Euro-Atlantic relation that NATO represents and its decisive role in defending and preserving its Members’ interests.

We could definitely ask ourselves if Trump is going to generate a NATO crisis, and if he does, is this crisis a structural one or an existential one?

The Washington Treaty truly belongs in the past, to the times of the Cold War and a more agile Alliance, so it clearly needs to be reformed. This, however, has never been officially addressed. Sooner or later, a debate that raises this issue will need to happen, in spite of what some might see as virtually opening a Pandora’s Box.

It is a known fact that a hyper-bureaucracy has taking hold of NATO, and this obviously leads to a long and tedious decision-making process. The mechanism of consensus, the fundamental underpinning of the Alliance, represents the element that makes national interest prevail over the collective defense, which is the Alliance’s reason for being. The doubling of efforts and the parallelisms resulting from the incapacity of finding a harmonizing NATO – EU connection leads to the waste of important resources and creates a state of confusion and uncertainty.

These elements point to an outdated Alliance, as Trump considers it. So, the much-needed reform is by no means a threat, but a necessity for NATO’ continuity and efficiency. The less than polite attitude of the American President does not preclude an irrefutable truth – we have a strong Alliance, but strong through tradition and continuity and not through modern reforms.

This is why we should see this aggressive approach as beneficial to the Alliance, as it underscores the need to reform it, addressing its faults, reducing the bureaucratic stranglehold and increasing flexibility on a political level, along with reconsidering its military role in promoting and developing these measures. The fact that the new Pentagon Chief is a general known for his innovative attitude, for his open-mindedness and vision, whose reputation stretches across the Alliance, is of major importance.

It would be a strategic error to consider Donald Trump’s statements as generators of strife, and we should rather look at them as a new and different approach compared to the ones we had grown accustomed to prior to this moment. We know that Trump is purposefully unpredictable, that he embraces a protectionist policy and other anti-establishment positions, that he lacks, for now, a consistent National strategy regarding foreign affairs, but we must also understand that NATO faces new missions required by the clash between civilizations, along with the reactivation of old threats.

As it faces one of its most important challenges, as spectator and also a key actor of this endless war against terrorism, the US, along with Europe in its entirety, must redefine the priorities that NATO has in defending the Euro-Atlantic space. It is a difficult task, as it might alter the basic structure of the Alliance and come against national interests that certain members have or used to have up to a specific moment. The constant threat that terrorism poses, along with the revival of insurgencies, require NATO to have proper capabilities and specific missions that can counter these elements.

Another important aspect is the unequal allocation of defense resources, stemming from intentional policy or from limited National capabilities (as shown in the figure below for 2013[1]). 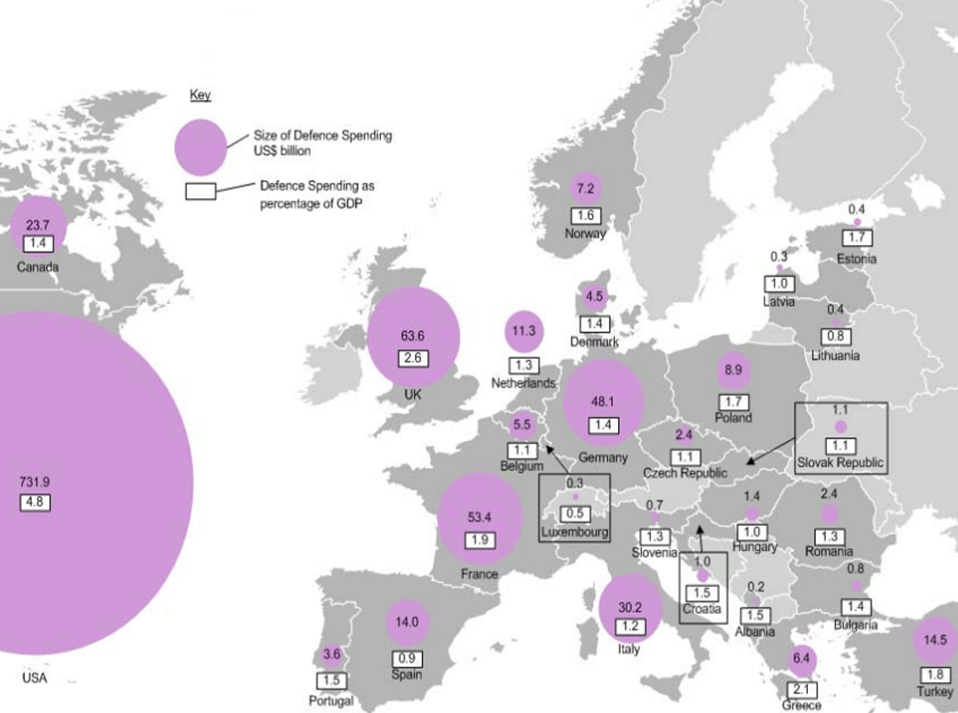 The decades-long US security umbrella has given a perverse incentive to reduce defense spending in Western Europe. As a direct consequence, we are dealing with a perverse lack of defense resources. This represents a major obstacle in creating an effective and able European Force that could protect its interests. On the other hand, few states develop principles and doctrines for National Defense, while the new Russian context forces NATO to balance the strategic, operative and tactical rapid deployment capabilities, through forces developed on territorial principles that could withstand and blunt the blow of the first offensive.

President Trump’s NATO paradigm is an educated supposition, but one that could always become reality.