These days mark the National Day celebrations as my country, the United Arab Emirates, strides forward with wisdom and perseverance, following in the footsteps of its founding father, the late Sheikh Zayed bin Sultan Al Nahyan, under the leadership of the President, HH Sheikh Khalifa bin Zayed Al Nahyan and his brothers their Highnesses the members of the Federal Supreme Council, Rulers of all the emirates, and through the hands of its loyal daughters and sons, pillars of the country’s growth and development, attaining developmental, cultural, economic, political and social achievements.

December 2nd of every year is an occasion for UAE nationals and residents alike to express their pride in the country’s developmental and civilizational achievements. The UAE's 47th National Day coincides with the centenary of the birth of the late Sheikh Zayed Bin Sultan Al Nahyan, the founding father of the UAE, as HH Sheikh Khalifa bin Zayed dubbed 2018 to be the “Year of Zayed”. The late Sheikh Zayed was renowned for his wisdom and vision, his role and his policies in building the country, achieving development, strengthening its economy and national security, and leading it on the path towards a prosperous future.

The values ​​of the late Sheikh Zayed bin Sultan Al Nahyan laid the foundations of modern cultural and developmental renaissance in the country. Inspired by these values, the wise leaders of the country took to building a bright future for the UAE, strengthening its position among the countries of the region and the world, an oasis of peace and political stability, economic and social development, and tolerance.

One of the most salient indicators of the success of UAE diplomacy is the strength of the UAE passport, which ranked third in the world in 2018 according to the World Passport Index, reaching 163 countries visa-free.

The UAE adopted an active approach to diplomacy, with a marked openness to the outside world, establishing an extensive network of relations with various countries around the world, essentially based on the respect for the principles and charters of the United Nations and the international community, foremost of which are democracy and human rights, and non-interference in other countries’ internal affairs. One of the most salient indicators of the success of UAE diplomacy is the strength of the UAE passport, which in recent years has achieved consecutive leaps. In 2018, it ranked third in the world according to the World Passport Index, reaching 163 countries visa-free.

At the national level, the late Sheikh Zayed believed that investing to ensure the well-being of the people and enhance their knowledge, skills and abilities would greatly benefit individuals, families and society. He wished to achieve progress in various fields such as health care facilities, educational facilities and other infrastructure in the United Arab Emirates. This in turn led to rapid and positive socio-economic changes. Sheikh Zayed’s generosity was not limited to his people: it extended to a large diversity of peoples around the world, alleviating their hardship and assisting them in meeting their needs. 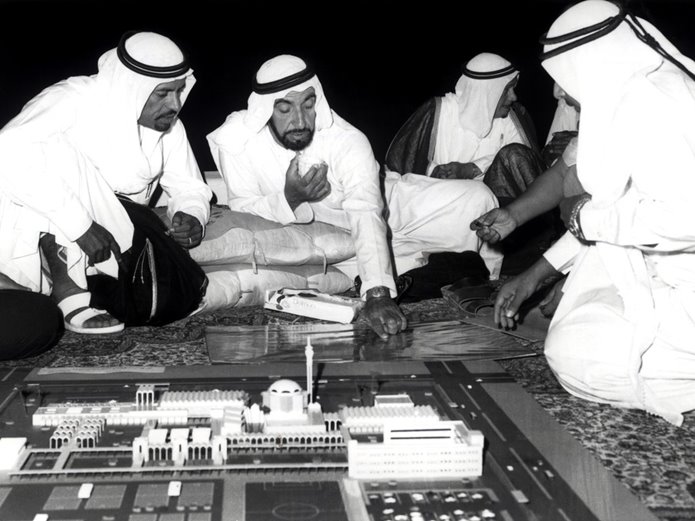 The UAE has also championed the values ​​of tolerance and multiculturalism, rejecting discrimination and hatred by adopting nationwide programs in partnership with various local, regional and international bodies. Today, the UAE forges ahead, a model of tolerance and acceptance, with more than 200 nationalities, among them 20 thousand Romanian citizens, living in harmony, treating it as their second home. The law guarantees residents, similarly to nationals, enjoy the right to use the state's healthcare, educational, cultural and entertainment facilities without any discrimination.

The UAE is actively involved in the fight against extremism and terrorism, and a key element in the country’s determined efforts to ensure its national security and enhance international security. The UAE has accomplished important achievements in this regard, both through military participation in Islamic and international alliances and through the enactment of local laws to fight against terrorism and its causes. These include the Law against Discrimination and Hatred, the Federal Law establishing “Hedayah”, the International Center for Countering Violent Extremism, in addition to a decree – law that criminalizes the slander of religions and their sanctities, to fight against various forms of discrimination, and reject hate speech. It aims to combat discrimination against individuals or groups based on religion, caste, doctrine, race, colour or ethnic origin

On the other hand, the vision of Sheikh Zayed was founded on the need to build an integrated economy. It was brought to life as the country succeeded in building and developing a prosperous business environment that is currently attractive for foreign direct investment. The UAE ranked first among Arab countries in 2017 for its ability to attract foreign direct investment. This established its position as a strategic trade hub that provides foreign investors access to regional markets, as well as the freedom to transfer funds and profits, in addition to an effective judiciary system and legislation, neutral courts, laws and legislation that protect foreign capital, and low customs tariffs that range between 0 and 5 percent on all goods.

The country spent 1.31% of its GNI on foreign developmental aid in 2017, which is nearly twice the global target of 0.7% set by the United Nations.

Dubai Expo 2020 is one of the most important achievements under way. The exhibition is an effective implementation of international cooperation policies and plays a central role in expanding and bolstering bilateral and multilateral relations. The exhibition is expected to host more than 200 participating countries. It will contribute to strengthening cultural understanding and nurturing cultural dialogue between nations, while changing the prevailing perceptions on the region. Dubai Expo 2020 will position the UAE as a cradle of emerging technology, an incubator for SMEs and entrepreneurs in the region.

The UAE’s achievements at the local level were not limited to the economic sector. The accomplishments of the people of the UAE, who are also called Zayed’s children “Eeyal Zayed”, exceeded all expectations, going into the final frontier: space. In an unprecedented historic achievement, the UAE announced the successful launch of the UAE satellite “Khalifa Sat”, the UAE's first full-scale UAE-made satellite, designed and built by Emirati engineers, in a move to establish a new phase in the field of space technologies in the country.

The UAE is also the world's first foreign aid donor. The vision of the late Sheikh Zayed Bin Sultan Al Nahyan was an inspiration for the foreign policy of the UAE, which committed itself to building bridges of friendship, work and cooperation with other nations. Today, the UAE continues to support the United Nations Sustainable Development Goals, which represent a roadmap or a specific path for building a better and more sustainable tomorrow for the world and future generations. The country continues to devote itself to addressing major global challenges, especially those related to poverty eradication, environmental protection, climate change, the establishment of justice and peace, supporting and promoting global progress.

Accordingly, the UAE has achieved qualitative growth across all areas. This reflected directly and clearly though several indicators, according to the World Economic Forum's Global Competitiveness Report, which covers numerous key areas such as quality of life, infrastructure, technology, and the adoption of business-friendly government policies. This comes to confirm that the country perseveres in its endeavours in accordance with the long-term approach of Sheikh Zayed to achieve stability and prosperity in the country, in the region and in the world at large.

For the fifth consecutive year, the UAE ranked first as the largest international donor of Official Development Aid (ODA) relative to gross national income (GNI). The country spent 1.31% of its GNI on foreign developmental aid in 2017, which is nearly twice the global target of 0.7% set by the United Nations as a global standard to measure the efforts of donor countries.

The UAE continues to hold a leading position on the list of Official Development Aid (ODA) donors as a share of the Gross National Income (GNI), one of its many achievement on the international level and across various fields.

These achievements are aligned with the legacy of the late Sheikh Zayed, as the UAE perseveres in its mission to serve humanity and support friendly countries while achieving economic prosperity and countering the effects of crises and disasters. The country aims to make impactful positive and tangible contributions to achieve the ultimate goals for humanity: eradicate poverty eradication and attain sustainable development by 2030. The UAE has taken the lead in efforts to combat poverty and provide foreign assistance to the needy, including the most vulnerable. 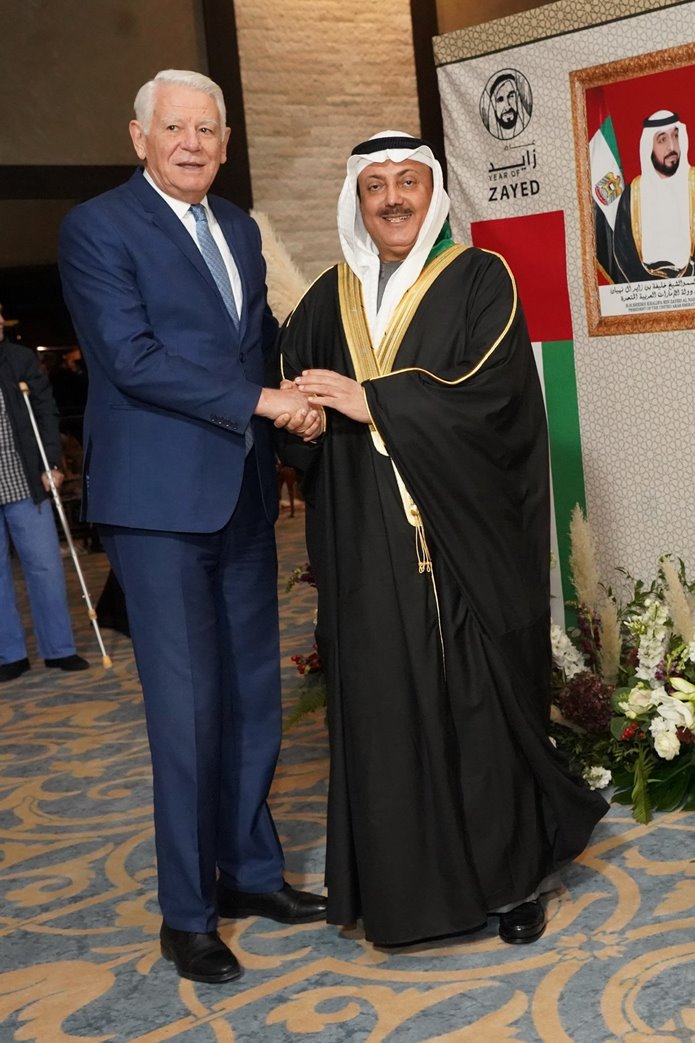 Source: Embassy of the UAE

On this historic occasion, one must commend the bilateral relations which join our friendly countries, the UAE and Romania, and also to comment on the beautiful coincidence that the United Arab Emirates celebration of the centenary of Sheikh Zayed coincides with the celebration of Romania's Centenary of the Great Union.

These ties are based on the principles of cooperation and mutual respect and have reached the level of strategic partnership between the two countries and peoples in recent years. The mutual visits of the leaders and officials of the two countries, and the ever-increasing levels of trade, economic and cultural exchange, are a powerful indicator which stands witness to the strength of bilateral relations in various fields. The organization of the first session of the Joint Committee between the Government of the United Arab Emirates and the Romanian Government in Bucharest, during April 2018, represents a new important step towards the development and deepening of the bilateral relationship based on the existing excellent cooperation between the two states. We have recently witnessed the formation of a particular momentum for bilateral contacts, especially after the visit of HH Sheikh Hamdan bin Zayed to Romania, and the visit of HE Viorica Dăncilă, the Prime Minister of Romania. to the UAE.

Romania will remain one of the most important economic partners of UAE in Eastern Europe, and the UAE maintains its interest in developing a solid partnership with Romania in all areas of common interest.