People(s) worshiping different deities and subject to different kinds of democracies, people(s) coming from older cultures or younger countries, all feel at home in the stands of stadiums or in the TV-oriented armchairs during football World Cups. Savian was yards away from Russian playgrounds and Vlad was inches away from HD screens. They play a friendly match in TMFI.

Romania at the World Cup

Football is culture and quite a few cultural figures stood, over the years, under the shadow of the great Russian bear. I will pay tribute just to one of the greatest: Andrei Tarkovsky. This article is an homage and, likewise, a metaphor to his creation: Solaris, hence the name: Mondialis.

Solaris is viewed by some critics to be the Soviet counterpart to Stanley Kubrick’s 2001: A space odyssey, in a neverending fight of the Cold War. It very well may be, but what I want to emphasize is that, while Kubrick took the man to meet the Universe, Tarkovsky reversed the experience and showed us the everchanging Universe inside the man. In a few words, Solaris’ ocean becomes psychologically powerful and questions knowledge and personal identity. Although this might be depressing, a man will never be the same after this interaction. Mondialis is an imaginary planet that hosts the World Cup and transforms people. It did the same for me. After I flew over the plains of Russia to The Memorial Museum of Cosmonautics, after I sailed the World Cup ocean of people to the very end, I have not only new memories, but also new questions.

Coming back to the World Cup – can you still be the same person after you have witnessed it?! From fan zones, streets, bars, metro stations (oh, what metro stations do they have!) to stadium bleachers? There is no earthly way of knowing prior to your first visit to Mondialis, but the odds are against that.

A World Cup is globalism at its best and the most globalized team has won it, or at its worst, some may say. Statues of Lenin himself stood nearby Coca Cola stands in front of Luzhniki Stadium.

Going further will see Africans with their dances in the Red Square, Asians exploring the beauties of Sankt Petersburg, Europeans amazed by the specific opulence of Russia and all those South Americans, with their long days of flight and lost nights at airports, but with their colours, rivalries and fantastic songs. Any World Cup emotion will touch you, but you will hear the sounds and the sighs long after they will have stopped. Allow me just to bring a few lyrics to you, no translation needed.

Pelé and Diego still reign supreme, Neymar and Leo have to win it (maybe next time) and they have to be absolutely astonishing to hope that they will be loved like the two titans. Although Kylian had a glimpse, Cristiano, Luka, Eden, Harry or Antoine also failed to steal the show for themselves this time like Garrincha dribbled it in ’62 or the way “El genio del fútbol mundial” put his hand on it in ‘86.

It would be unfair to the English not to mention that someday: “It’s coming home / Football’s coming home” will happen or to Mexicans not to mention their Cielito lindo: “Ay, ay, ay, ay / Canta y no llores / Porque cantando se alegran / Cielito lindo, los corazones!”. Now imagine all the people in their national team t-shirts singing, dancing and dreaming with caution that They might just win it and grasping with their mental claws every moment in a desperate attempt to eternalize that second. To forget the possibility that the World Cup might end and that they will have to leave Mondialis in order to let their day-to-day life reassert itself from oblivion. Football is celebration and the World Cup is the world’s biggest feast!

Viewed from another angle, football is politics. Since the first World Cup in Uruguay to the last one that ended in Moscow, with three presidents on the pitch congratulating the players between raindrops, purest joy, disillusion and frustration, via Italy 1934, Argentine 1978 or, why not, with your permission, France 1998.

The politics of today are here for us to unravel. France won the World Cup with a very young and skilful team. It seems like France will lead Europe too, after a leadership takeover from Germany, both in football and politics. I am not a France fan, nor am I a Macron enthusiast, but they are very well placed to tackle this issue and to make a twist in Europe’s future. I will not bet on One Europe from the Atlantic to the Urals, not now, not in the roaring twenties that will follow this World Cup. Caught between US and Russia, with England leaving and with a mellow Germany, this victory for France should be a tipping point for Macron in his attempt to build a New European Order.

This is politics as usual, but since almost all of the greatest football stories begin with a poor child and his imaginarium, in this story the dream was just to be there, to witness, to feel, to breathe, to taste... The kid was born in Oravita and he was as poor as Oravita was, but to love was free back then.

On July 3rd 1994, at noon, a father put his son to take a nap so that they can stay awake in the heat of the night for the greatest match[1] that ever was. The father taught the child that he has a country, Romania, which has a national anthem and those boys on the football field are singing with the tricolor on the chest for all of those who are at home, but above that, they are playing for the child himself. He will never forget that day.

Sometime in 2017, he and his friend Johnny had a vision. If they play their cards well enough, they can maneuver to be in Russia, for a few days, to live the dream they both share. For the first time, a World Cup was within reach. Just to be there would be an all-time high. The story goes on and in spring 2018, they bought tickets to a World Cup match[2] in Nizhny Novgorod. None of them knew where that city was, but it did not matter. A new all-time high appeared at the horizon.

By a friend’s goodwill, on June 22nd 2018 they went to Sankt Petersburg to see Brazil in a World Cup match[3] - all-time high plus joga bonito. A mention is needed, he met Ronaldo - in 98’ he had a poster, now he has a picture.

…and to the Final: 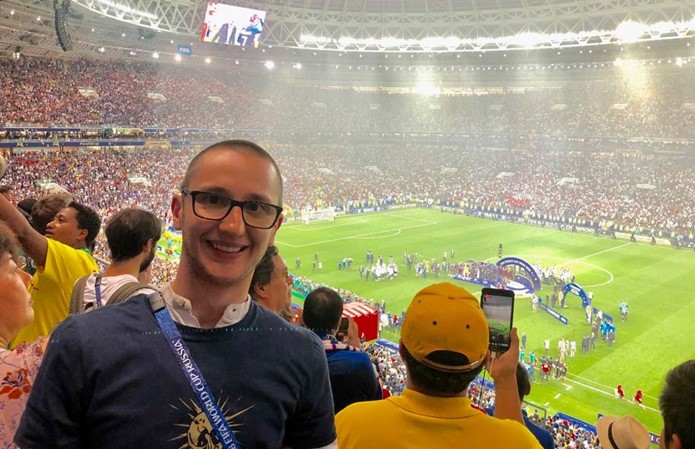 It gets no better than this so it has to end. We have to take off from Mondialis and land back on Earth. Leaving Luzhniki after that purple rain washed everyone’s World Cup emotions a movie line got vivified, but this time was an American one, where the World Cup will go after a short trip to Qatar:

“I learned the greatest gift of all. The saddest thing in life is wasted talent, and the choices that you make will shape your life forever. But you can ask anybody who has been to Russia those days, and they'll just tell you this is just another World Cup tale.”[4]

This article is dedicated to my friend Johnny for his faith and his presence.

Money makes the ball go round

In the end, it was Hugo Lloris who lifted the World Cup trophy over his head during a muscovite rain shower that added to the flair of a game of such intensity. The World Champions title went to a team that truly deserved it, France, a football-mad country, with young players of genuine quality, with consolidated investments in nurturing talent and which, on its way to Luzhniki Stadium, saved some game against Denmark, defeated superpowers such as the likes of Peru, Argentina, Uruguay, Belgium, and topped it off with Croatia.

At the same time, the Russian World Cup was an up-close reminder that everything is possible – and not only by the claims of advertising catchphrases. Germany, Portugal, Argentina, Spain or Brazil were eliminated sooner than most pundits would have thought of (arguably, each of them would have had to reach the final, for only two available places).

Although not the best in terms of play – some might argue that the crowded season calendars with domestic league games and international club competitions took their toll in fatigue or stamina (it would suffice to look at Lionel Messi’s attitude during Argentina’s games) – the World Cup demonstrated that football is not only a matter of the rich becoming richer. Indeed, Egypt, Saudi Arabia or Australia did not raise too many eyebrows through their results. But, at the same time, the competition saw Iceland draw against Argentina, Iran against reigning European champions Portugal (and almost sending them home), or Russia eliminating Spain in the round of 16. And above all – and next to France – the World Cup brought Croatia and Belgium to the forefront. The fact that two countries of 4 million and 11 million inhabitants, respectively, won silver and bronze medals after getting the better of England and Brazil establishes that neither money, nor population numbers or economics (in as much as some might want it or say it to be so) shoot goals, as Otto Rehhagel once famously uttered.

The World Cup was about rewarding those who really wanted to play football in spite of their disadvantageous starting blocks against those who were not at all mentally fit to spend one summer’s month in Russia. Iceland returned to their tiny isle of 300,000 people after being eliminated from the cup and, a couple of days later, national coach Heimir Hallgrimsson went on with his work: refereeing a youth competition of six-graders in Vestmannaeyjar. This down to earth attitude is what made Iceland and some other underdogs shine in Russia: loving football as it is, the purity of the game, irrespective if it is a World Cup, a Champions League or any kind of non-league game somewhere in the remote countryside.

Locker room pump-up discourses frequently offer up the saying that the players should not consider themselves defeated until the game is truly over, or that opposing teams are still formed by humans themselves, even though they put forward their best. The Russian World Cup was more than words: it was their cold, factual demonstration.

[4] A Bronx Tale – an intentional misquote